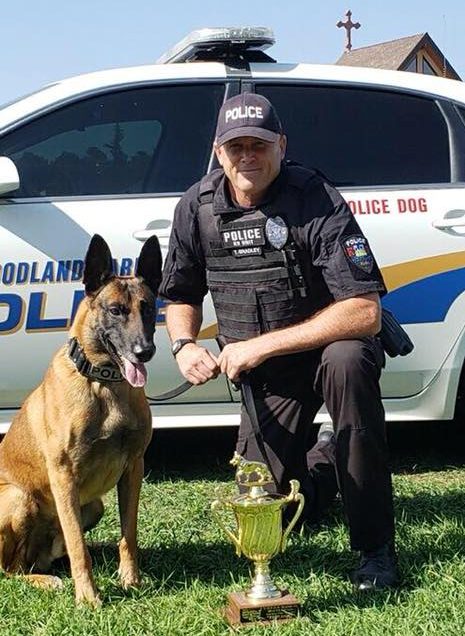 Earlier in the year, the Woodland Park Police canine team consisting of officers Timothy Bradley and his dog Rico received an invite to be on a new series airing on the cable television channel A&E.

“A&E will premiere the ultimate K9 competition series “America’s Top Dog” beginning Wednesday, January 8 at 9pm ET/PT,” Wray said. “The series will feature a competitor from the Woodland Park area who will compete for the title of “Top Dog” over three rounds of competition that test their speed, agility, scenting and teamwork.”

Each one hour show will feature four canine teams matching up against each other to prove who really is America’s top dog. The competition will include canine teams from the popular TV show “Live PD” as well as civilian teams.

During each episode, the teams have a chance to win special prizes. According to Wray, the winner of each show will receive $10,000 and an additional $5,000 will go to an animal related charity of their choice. Then, the top competitors will compete in a final series that will award the winner $25,000.
According to Bradley, he couldn’t disclose details of the competition or the results. He did say that he and his dog Rico were the oldest canine team competing, and that they were competitive when challenging younger teams.

He said that after he got the offer to be on the show, the command staff at the police department were open to the idea and let the canine team take a week off to go to Los Angeles. This was a move that Bradley said other police departments didn’t want to do. The canine officer said that he enjoyed the experience and that he chose to drive out to L.A. instead of fly with his dog in his lap like other competitors did.

Bradley said that he enjoyed the opportunity to compete with his canine and show off the skills that he has learned by being involved with training dogs most of his life. Rico also showed off his seven years of experience working with police departments.

Bradley said that he and Rico are on call 24 hours a day, seven days a week, and 365 days a year. At any time he and Rico can get called out to assist any of the law enforcement agencies for a variety of tasks.

According to Bradley, Rico was originally trained on discovering marijuana but now he has been focusing on other scents. He said that the team will be called out to sniff for a wide range of narcotics as well as articles of evidence at times.

Bradley also said that dogs are often used to help police take suspects into custody. “You can hear a canine when they are on the scene the dog starts barking and that’s a game-changer,” Bradley said. “Rico has had 100 percent compliance when I put him on the ground. People have just given up and said, ‘nope I don’t want to take a chance on getting bit.’ And that’s worth a lot if you can get somebody in custody without the officer getting hurt or the canine getting hurt.”

Rico is nearly 10-years old and is one quarter German Shepherd and three quarters Belgian Malinois.

According to Bradley, Belgian Malinois dogs are not as popular as German Shepherds when being used by police because they can be tough to handle.

“The military and special forces use the Belgian Malinois canines because they can go over an 8-foot  concrete wall and they jump like mule deer,” Bradley said. “And, they can bite incredibly hard. The problem we had with Rico was that there for a long time, he was punching through the bite suits.”