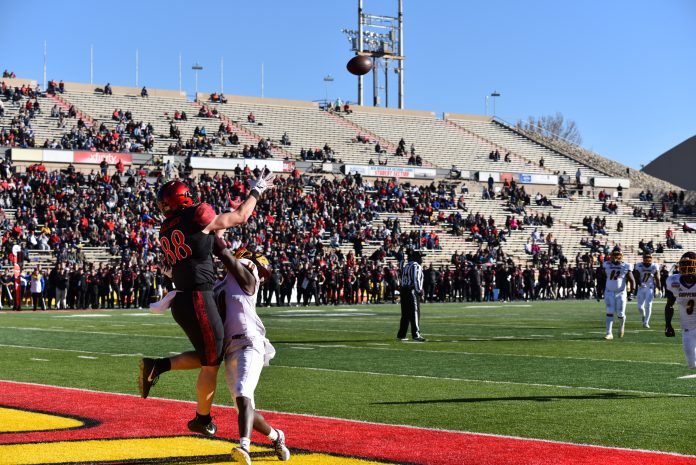 Anyone who has ever been to Albuquerque, NM knows that a common question they have to answer is “Red or Green?” 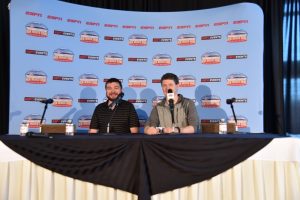 the infamous chili question that gets asked at every restaurant in the city. The answer, in fact, could determine whether your team will the bowl game or not, or what type of character you are.

Last weekend started the favorite time of year for college football fans as the bowl game season commenced. This year, the college football championship game schedule was changed up a bit and the Bahamas Bowl and the Frisco Bowl took place last Friday and they were the first games that kicked off the 2019 holiday season of college football’s final matches.

This year, I chose to celebrate the bowl game season as I have the last two years in a row down by traveling to the southern city in our neighboring state to experience the week of festivities for the New Mexico Bowl game. I chose to go to New Mexico because it is the closest bowl game to Colorado even though no local teams played in the match. Several years ago, our beloved Colorado State Rams partook in the New Mexico Bowl, an outing that attracted my attention.

The week always starts of on the Wednesday before the game that is held on Saturday each year. During the week before the game, the teams get to spend some time experiencing what Albuquerque has to offer including a variety of dinners and an elementary school visit.

On the Friday before the game the coaches and two select players go to the Isleta Resort and Casino for a press conference and a team luncheon inside the facility’s giant ballroom. Then, during the afternoon before the game, the team’s bands and cheer squads fill up a park in Albuquerque’s Old Town Plaza for the annual battle of the bands event.

While in town, members of the school and other spectators get the chance to walk around and shop in the old town part of the city. Others take the time to travel around the area and see what else the town has to offer.

If you ask me, the town of Albuquerque is a place where much fun can be had for everyone and I think that it is rather underrated as a tourist destination. The Isleta Resort and Casino, for one, is a beautiful reservation facility that has multiple restaurants and many other things to do besides gamble, such as golfing , bowling or playing arcade games and challenging someone on a pool table.

Another hidden gem in the city is the Sandia Peak Tramway. The tramway is the longest in the country and takes spectators 4,000 feet up to the peak of New Mexico’s famous Sandia mountain range that has an elevation of 10,300 feet. 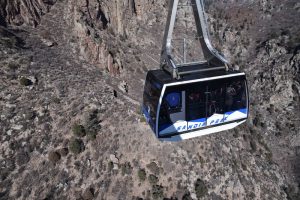 The tram ride itself is a little nerve-racking for anyone who may be scared of heights, but the views make the ride worth it. Once on top, spectators can see nearly 11,000 square miles of land which is approximately nine percent of the state of New Mexico.

The top of the peak has a visitor’s center with historical and geological information as well as a fine dining restaurant. Skiers can also ride up on the tram and ski down the mountain’s back side on the slopes of the Sandia ski resort.

For football fans, the trip is a good way to start getting excited about the college bowl game seasons. 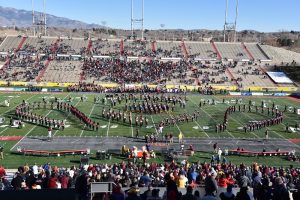 Even though this year’s game was a blowout where the San Diego State Aztecs dominated the Central Michigan University Chippewas by a 48 to 11 score, the day was blessed with picture-perfect football watching weather as it was sunny and the mercury exceeded the 50 degree-level.

Notable moments during the game included when Kyahva Tezino blocked a pass and intercepted it during the first part of the gaming, a move that earned the player the defensive MVP award. San Diego State running back Jordan Byrd was given the offensive MVP award as he broke his personal record and ran for more than 130 yards in a single game.

No Verdict On Red Or Green Chili 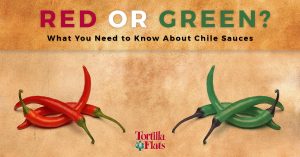 As for my personal answer to the city’s famous “Red or Green” question, I am still undecided. I personally like both. I guess I might have to return next year to try more of the different kinds of chilies and get more of a solid answer.

For Colorado college football fans, the only team that earned an invite were the stellar-looking Air Force Falcons. This Friday, Falcons fans have the privilege of watching their team take on Washington State during the Cheezit Bowl in Phoenix, Arizona.

Trevor’s Prediction: I think that this bowl game should be an easy one for the Falcons to win. The Air Force team as looked good all year and showcased an explosive offense that showed teams they meant business during the 2019 season when they dominated the scoreboard. Washington State on the other hand did not really have that successful of a season as they ended 2019 with only a 6-6 record and they only ranked fifth in their Pac 12 conference. Air Force 38, Washington State 20.