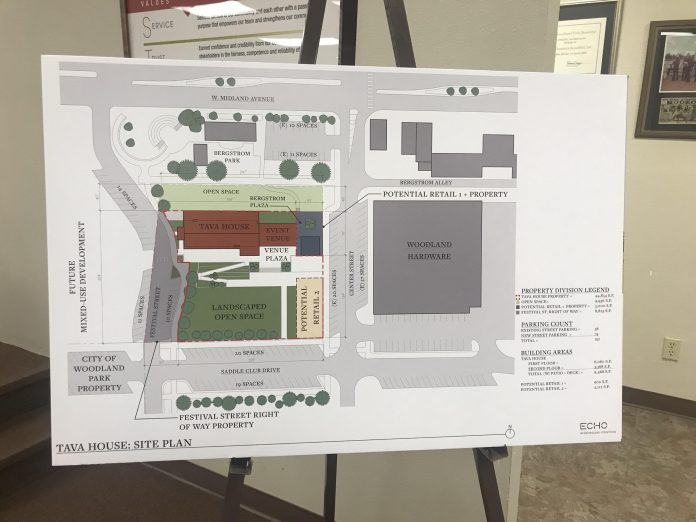 After months of speculation, plans were finally unveiled for a signature development at the Woodland Station area.

At last week’s regular meeting of the Downtown Development Authority (DDA), Mark Weaver gave an update for the TAVA House. The proposed multi-use project could feature a restaurant, sports bar, events center, and retail, according to earlier reports. It is one of the first major commercial developments planned at Woodland Station in years.

Since the first announcement of Weaver’s intent for the development in early August, the developer has kept the plan under wraps. Weaver and the DDA have been having negotiations regarding changes to the development and last week’s meeting marked an update on the progress of those negotiations.

The updated plan includes moving the main building 40 feet further south on lot 2 of Woodland Station. Weaver explained the reason for this is to provide an area of green space in front of the building. The move will also place the building lower on the lot so as not to obstruct views of Pikes Peak. The main 5,000 square-foot-building design has not changed.

DDA Chairwoman, Merry Jo Larsen raised an important question as to parking for the project. Weaver has been in negotiations with Arden Weatherford, owner of the Amerigas property, for the right to use a portion of that property for parking. Larsen asked what would be done if those negotiations failed.

She said, “If that does not happen, what are your plans for parking for the TAVA House?” Weaver said they will have to come up with an alternate parking plan should that occur. Weaver said, “We’ll have to find another place.”

He cited a section west of the project that is owned by the city that may be a possible location for parking. He said, “We’d like to use that.” Which entity would take responsibility for the cost of the parking is still in question.

The discussion then went to the timeline for construction. Weaver stated his intent to begin construction by June 2020. He stressed the importance of beginning construction by then because of the stress it would place on investors, should the project start later than June.

If the project begins in June, Weaver estimates the opening would be sometime in March 2021.

Woodland Park Planning Director Sally Riley said with the appropriate plans submitted to planning and city council the process of approval would take about three months.

Another possible hurdle raised last week came when Weaver indicated he may want to control what other types of developments are constructed around the TAVA House. This raised some eyebrows among the DDA board members and may prompt more discussions. 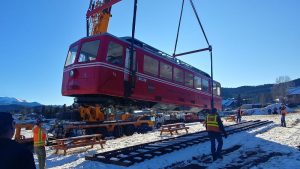 In other DDA news, the board discussed the successful installation of the cog railroad car at Bergstrom Park. At this time the cost to the DDA associated with the installation of the car is $9,902. At the last monthly meeting, the DDA board approved the sum of $15,000 to install the car. The DDA has also received a check from Dwain Carter for over $12,000 and other donations for the maintenance and upkeep of the car are coming in. Donations will be handled through the Mountain Arts Council to take advantage of their nonprofit status.

The board scheduled a special workshop on Wednesday, January 8 in the council chambers, at 6 p.m. to discuss possible uses for the cog car. The public is invited.