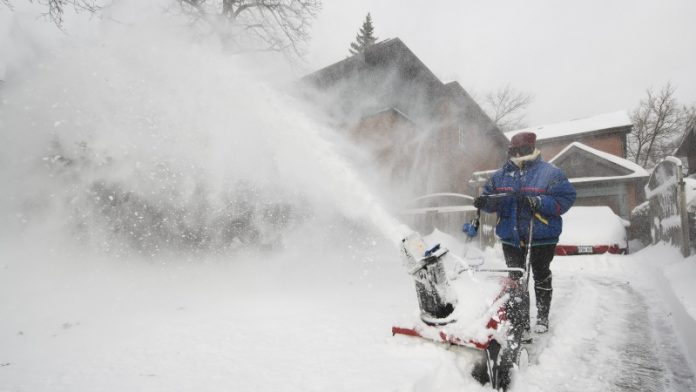 ~ by Trevor Phipps ~
During the last two weeks, Mother Nature unleashed a winter wrath on the Pikes Peak region that has riddled the area with large amounts of snow and frigid temperatures.
Recently, WP schools were closed on a Friday due to the county receiving around six inches of snow.
Last week, two more storms came blowing into the area that crippled travels locally and shut down a number of businesses. Schools, though, were not negatively affected because local students were out of school for their Thanksgiving break. 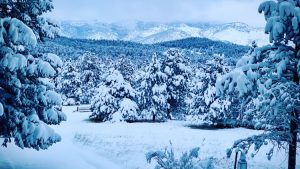 Last Tuesday, the second snowstorm in a seven-day period struck the region and gave the area more snow than any single blizzard this fall season. The official weather tabulations for Woodland Park reported that the town received 8.5 inches of snowfall. However, many other local residents reported amounts of snow in the Teller County area that exceeded afoot.
During the storm that swung into full force early last Tuesday morning, many of the roads in town became snow-packed and icy. However, due to schools not being open, traffic in the area was very thin on Nov. 26, the peak day of the recent barrage of storms.
Local officials decided to shut down county buildings, and the Woodland Park Public Library was closed. The operator of the  Woodland Park Visitors Center located inside the Ute Pass Cultural Center building, the Woodland Park Senior Center and a spree of local businesses also decided to keep their doors closed throughout the day. Some banks in the region also were shut.
Local residents were warned of the bad road conditions, and travel of any kind was discouraged. Since temperatures that day did not get above the 20s, the snow did not melt at all and road conditions remained dangerous throughout the day. On Tuesday night, temperatures in the area dropped below zero.
On Wednesday, temperatures stayed below freezing and whereas the highways were decently clear, many of the back roads in the region remained icy and snow packed.
Teller County was not the only area to get hit with excessive amounts of snow last Tuesday as it was reported that the storm was worse in the northern part of the state. Neighborhoods in the Denver metro area reported close to a foot of snow, Boulder received nearly two feet, and Estes Park had snow totals of more than 30 inches.
Temperatures warmed back up on Thursday and many of the roads melted before round two of the recent snow storms that struck the area Friday afternoon and evening. At around 3 p.m. last Friday, a storm containing small amounts of snow and high-speed winds came in quickly.
At one point motorists were forced to struggle with “white out” conditions as flurries blew sideways and a thick fog rolled in. The storm did not last for a very long time and did not produce much snowfall, but the inch or two the storm did bring left many local roads icy making road conditions dangerous yet again.
According to local weather enthusiast and TMJ staffer Bob Volpe, Woodland Park has been bombarded with 37 inches total of snow during the 2019 fall season. Volpe said that his records show that the first snow of the season occurred on Oct. 10, with the area receiving four inches.
Since then, Volpe said that Woodland Park received a total of 22 inches during the month of October and 17 inches during November. Volpe, who has snow total records dating back to 2003, said that the amount of snow received this year is above average, but doesn’t represent a record high. About a decade ago, the area got hit with 48 inches of snow one time.
According to many long-time locals, the recent barrage of storms resembles the typical  patterns of winters in the high country, prior to an extended dry spell.