This season, Andrew Pappadakis, who previously led the team, retook the reins and the WP kickers improved in some areas but encountered a rough road at the outset of the season.

The Panthers kicked off 2019 with three losses in a row and they didn’t pick up a “W” until they played Sand Creek at home and won 4-2. The Panthers continued to struggle during the season as they lost many games by high score margins.

The Panthers finished their season with an overall record of 5-10 and a league record of 2-6. The Panthers, however, did record two big wins towards the end of the season when they beat Pueblo County on the road in overtime 3-2 and they dominated Harrison by a score of 5-1 at home.

The Panthers ended up getting ranked 185th statewide. With their 2-6 record, the Panthers ended their season in seventh place in their 4A Colorado Springs Metro Conference. Sierra and Harrison fell behind Woodland Park as the TCA Titans took first place and Mesa Ridge grabbed second.

Senior soccer player Greg Pappadakis had his best season as he played all 15 games and made eight goals out of 51 shots. Senior Nick Nijkamp also did well with scoring four times out of 16 shots.

Defensively junior goalie Josh Gutierrez played all 15 games defending the Panthers’ goal. The goalie had 44 goals made against him but also racked up 134 saves during the 2019 season. 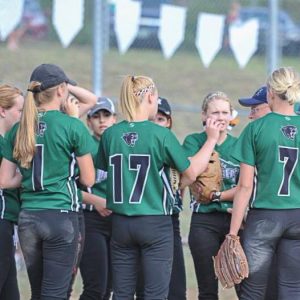 The Lady Panthers’ roller coaster softball season has come to an end,

The girls both started and ended their season with losing streaks while winning a number of games in- between.

The girls’ season started out rough as they lost their first seven games in a row. The Lady Panthers weren’t able to pick up a win until they beat Sand Creek on the road by a 20-2 score on September 5.

They then improved decently and were able to win a few key games by large score margins. But then, when it counted, the girls hit a rough patch and resembled the team at the beginning of the 2019 season.

At the end of their regular season play, the girls lost five games in a row. Included in those five games were big losses against league opponents such as Canon City, Mesa Ridge, Widefield, and Elizabeth.

This apparent slump knocked the girls down in their league and barred them from any post-season opportunities. The Lady Panthers ended with a 7-16 overall record and a 3-5 league record.

The girls were ranked 128th in the state. Their 3-5 league record forced them to end up in sixth place in their 4A Colorado Springs Metro League. Harrison, Mitchell, and Sierra all fell behind the Panthers as Mesa Ridge took first. Widefield took second and Elizabeth snagged third in the conference.

Despite their losing record, the team has great potential for next year. They only had two seniors on the team they will be losing to graduation. The two seniors, Jada Boddy and Dani Thrailkill, played their last high school softball season this year, and they both had pretty successful stats.

Thrailkill also played impressively in 2019 as she earned a batting average of .418 and she got 23 hits out of 55 at-bats. She also scored 26 times, earned 24 RBIs and hit the ball out of the park on four different occasions.

Other players that shined during their season this fall were junior Gabby Cox and sophomore Haley Anthony. Cox earned a .408 average during the season when she got 20 hits out of 49 at-bats. She also earned 16 runs, 17 RBIs and got one home run.

Anthony also showed that she can play with the older players as she earned a .565 batting average by getting 13 hits out of 23 at-bats. The sophomore player also hit one single, one triple, scored 13 times, and had two RBIs during the 2019 season.

The team’s top two pitchers during the season were sophomore pitcher Courtney McKee and freshman pitcher Marin Kleppe. Mckee pitched a 5.22 ERA with 14 appearances, while Kleppe earned a 5.25 ERA with three appearances.