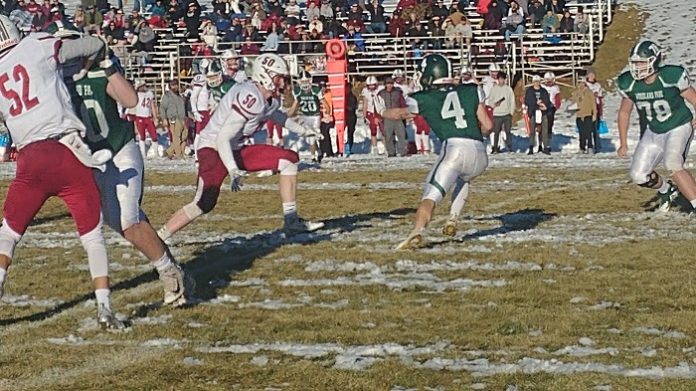 According to Woodland Park head coach Joe Roskam, the Panthers’ football team ended their season on an awesome note when they played their final postponed match against the TCA Titans at home.

Due to the snowy weather and cold temperatures that plagued the area last week, the Panthers last home game was postponed from Friday night to Saturday afternoon.

The Saturday afternoon game seemed to attract a bigger crowd as parking at the game was very limited. Due to the scheduling change, there was also a home forensics tournament that was taking place all day on the campus. The packed parking situation was also due to the fact that many spectators came to watch football on both sides of the stands.

The game started out pretty even as the score was tied at 7-7 in the second quarter. During the second period, the game play was quite defensively driven. Both teams struggled offensively. 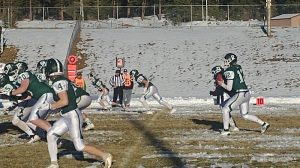 Towards the end of the first half, it appeared as if the opposing TCA Titans were going to break the tie and score as they were driving the ball down the field. But once they got deep into Panther territory, the local team’s defense stepped up and made a huge play.

It was starting to look like the Titans were going to score when they dropped back to pass towards the end zone. But then, suddenly strong safety Tristan Dimery stepped in front of a Titan receiver and secured an interception. Dimery stole the ball and then had quite an impressive 10 yard-plus run.

The time to play in the first half was limited when the Panthers stole the ball back from the Titans. The Panther offense tried to drop back and pass but their attempts were denied.

During halftime, the festivities were altered due to the fact that this was the last 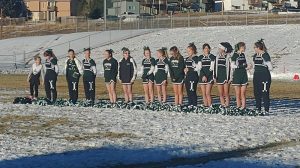 football match of the 2019 season. Recognitions occurred for the senior cheerleaders that would be leaving the team after graduation this spring.

After the halftime recognitions, the game started with the Panthers kicking off to the Titans. TCA quickly drove down and scored a touchdown making the score 14-7 during the start of the third quarter.

But then, once the Panthers received the kickoff they started to show some good energy. At first they struggled and they got themselves stuck deep back in their own territory on a third and 11 dilemma.

However, right when they needed action, they made a big play when quarterback Colin Kucera dropped back to pass and connected with running back Elliot Patterson, putting the Panthers in Titan territory.

The Panthers kept driving down the field and got close to the goal line. Then, Kucera dropped back and hooked up with tight end Bryson Cox for a passing touchdown to tie the game at 14 a piece.

After the last tie, the game got more exciting when the Panther defense kept the Titans to only six more points. The Panther offense stayed strong and put the ball into the end zone two more times to win the game.

With the Panthers final win, they ended the season with a winning 5-4 record. This is a massive turnaround from last year. Secondly, they excited the crowd that nearly filled the stands as they got to watch their Panthers make a big win during their last home game.

Unfortunately, despite a highly successful season, the Panther carded a 2-3 league record, making any chance of a playoff berth impossible. The Panthers, though,  did end up beating their league champions, the Titans, and they gave them their only league loss of the season