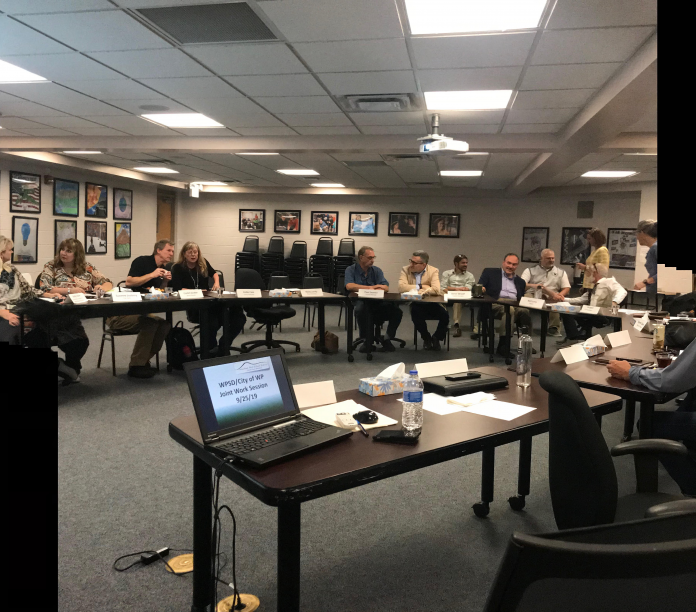 With rumors abounding about strained relations and questions regarding tax spending, the Woodland Park RE-2 School District and the WP City Council held a special workshop to iron out their fiscal differences.

Concerns had been raised on social media outlets and insider reports that the city may be considering cutting funding for the school district by changing certain provisions of a previous tax package approved by the voters and sponsored by the city. This meeting was held to explain to city official how the money is being spent.

District officials gave a comprehensive power-point presentation on the history of school funding and the hurdles facing this district and schools across the state. They cited the fiscal obstacles school districts are currently confronting.

The events affecting school funding in the state include the passage of the Gallagher amendment passed in 1982, the Taxpayer Bill of Rights (TABOR) law passed in 1992, and the 1994 Public School Financing Act authorized in 1994.

The Tabor law prevents any tax increases without a vote of the people and limits the revenue the government can collect. Those two measures combined created the “perfect storm” for  school funding woes throughout the state.

According to Board of Education President Beth Huber, “Unfortunately the ratio of funding between state and local was already lost between the Gallagher and Tabor affects.”

As school funding continued to decrease, Colorado voters stepped up to the plate in 2000 and approved Amendment 23 to have state school funding increase by the cost of living, plus 1 percent. Unfortunately for school districts, the state lawmakers found a way to take away special categories that were funded by Amendment 23, once again creating a shortfall in school funding.

This prompted school districts to think outside the box in ways to obtain money in order to survive.

In 2016 Woodland Park citizens passed a sales tax increase of 1.09 percent to address RE-2’s floundering funding. The measure was passed by a 60/40 ratio. The sales tax increase has no expiration date, so it will continue in perpetuity.

This was an unusual event considering the city’s history of turning down most tax increases. The nature of the hike also was unusual because it was not a district-wide levy and amounted to a sales tax approved by the voters of Woodland Park, with the extra revenue going towards specific needs of the school district. It culminated a strong and highly successful campaign, organized by RE-2 District supporters.

But the plan at the time did generate a few question marks about the logistics involved regarding the city’s support of the measure.

According to insiders, the key to the passage of the tax package dealt with district leaders outlining the specific programs and capital expenses that the extra taxes would be used for.

Following Through With Our Promises

As a result, the majority of the district’s presentation last week focused on how the district is following through with that commitment of spending the 1.09 sales tax increase on specific needs and not on administration. Sixty percent of the money raised by the sales tax goes to servicing the debt on the $14.6 million bond issue to build Columbine elementary that was passed in 1986. If projected sales tax revenue continues, the bond issue will be paid off in 2037.

Some of the programs funded by the sales tax are: tech career and new innovative programs,  technology enhancements, college level courses, among others.

Teacher salaries and benefits also play a role in the ever increasing burden on the district. Woodland Park RE-2 Superintendent Steve Woolf described teacher salaries as an “arms race” as the district competes with other school areas in hiring the best teachers.

After the presentation, a question and answer session began.

Mayor Neil Levy stated he understands the district’s money problems and said, “We feel your pain. We all have issues with salaries, maintenance, safety and security.”

Secretary of Gateway Elementary Nancy Lecky suggested the city and school board hold more meetings and form a partnership on issues involving finance and government.

City Manager Darrin Tangeman stated that he wanted to work with the county to address growth issues.

Huber suggested the city and district officials meet at least once a year just to touch base and to see what kind of things they could help each other out on.

Councilperson Kellie Case addressed the elephant in the room. She said, “I can tell you this council has no intention of taking that money away. That’s not happening.”

Councilperson Paul Saunier agreed. He said, “To run this school system, they need the money. I have no problem with that sales tax.”

In recent weeks, concerns have mounted that some city leaders weren’t happy with this tax allotment and wanted to rescind the package. This has created a mini-controversy behind the scenes, with school officials crying foul, noting that this tax was approved by the voters.

Huber thanked Case for her words and stated that, “We felt that we needed to present it this way to answer any question about sun-setting any portion of the sales tax. This is money now until something major changes with the state and at that time revisiting what we have would be an appropriate time. That is why we wanted to open up this line of communication.”

Levy said he believes if the district asked for more money, it would pass by a larger margin than it did in 2016. He lauded the district and said, “Keep up the good work.”

He did qualify his support of the district, stating that council has an obligation to all the residents of the city. He said, “We’re gonna hear from them. A good community can’t be had without a good school system and we have a great school system. I think everybody agrees with that.”