After a 12 play drive, including two converted fourth downs, the Broncos win with 37 seconds left on the clock.  Joe Flacco connects with Emmanuel Sanders for a touchdown and a 14-13 victory. No wait. With  37 seconds left  the Bears drive to the Denver 35 on the ensuing kickoff, with the help of a non-existent roughing the passer penalty and a phantom time out from the ghost of George Halas. With 1 second left, Chicago kicker Eddy Pinerio hits a 53 yard field goal to take the Broncos win away 16-13.

Such is the life of a Bronco fan. Victory snatched from the bowels of victory by inept referees.

The Broncos fought back hard and showed some serious heart.

A Tough Challenge In Cheese Land 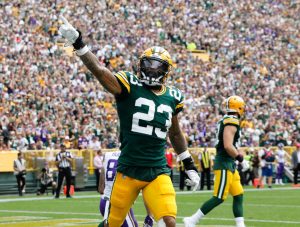 But next week they’ll need to bring their A-game. They travel to Lambeau Field in Green Bay to take on the Packers.

Last week the Pack won a hard fought game against division rival Minnesota Vikings. Packer elite quarterback Aaron Rodger bounced back from a sad performance against those Bears in their season opener. Rodgers threw for 209 yards and 2 TD’s against the Vikes and sent the Vikes packing 21-16.

With the way the Broncos are playing catch up in the fourth quarter, the last person you want to see in a close game is Aaron Rodgers. Add in the magic of Lambeau Field and the Broncos are up to their butts in alligators.

The Broncos hope lie in their defense and last week they didn’t show up for the second week in a row.

Again the Bronco defense fell victim to the dink and dunk offense. The Bears  only had a few big rushing/passing plays but did enough to keep the chains moving. Their defense did the rest. Oh yeah, and that timeout called by the ghost of George Halas.

Let’s face it this Bronco team is struggling with the new offensive scheme, new coaching staff, and a quarterback with two games experience with the team.

This upcoming game isn’t a death blow if the Broncos lose again, but it does indicate they are not going to be hitting on all cylinders until sometime around mid season.

TMJ Pick: So who wins next week?  Packers win this one big: 31-14. They won’t need the ghost of Vince Lombardi to pull their fat out of the fire either.