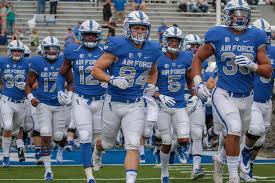 The Air Force Falcons took on the Colorado Buffs for the first time in several years in a highly publicized game last Saturday.

The Falcons went into the game off of a bye with a 1-0 record, so many weren’t sure about how they would fare against the Buffs. After all, the Buffs edged past Nebraska in their opener, sparking claims about a golden season. In fact, the Vegas odds makers favored the Buffs by three and a half points. Well,  the experts wagers may be looking for a new day job, as the Falcons overcame the Buffs in overtime 30-23.

The Falcons started out on top as they quickly came out scoring and they were able to shut down the Buffs’ offense. The Buffs were up 10-6 at the end of the first quarter, but then the Falcons scored two touchdowns in the second quarter that went unanswered.

The Falcons led the Buffs at halftime by a 20-10 score that they held until the end of the third quarter. In the fourth, the Falcons kicked a field goal to make it 23-10 in the last quarter of the game.

But then, with six minutes left in the game, the Buffs scored a touchdown on a huge play that made it a one score game. The Falcons blocked the extra point making the score 23-16.

The Buffs proved that they were still alive when they drove down the field with a few minutes left in the game. The Buffs offense drove a total of 60 yards in 13 plays to eventually score a rushing touchdown with 28 seconds left of game play.

The Buffs kicked the extra point sending the game into overtime. During OT, the Falcons got the ball and quickly scored a touchdown making the score 30-23. The Buffs got the ball for the last time but they were unable to score giving the win to the Air Force Falcons.

Last week, the Falcons quarterback Donald Hammond III had quite a good game when he made seven out of twelve attempts and threw for a total of 155 yards with two touchdowns. Hopefully the Falcons can keep their momentum on offense as they take on the Broncos who are also 2-0. If the Falcons win, it will put them in first place in the Mountain West, but Boise State has been playing well so far this season.

Boise State currently has a national ranking of 22, but their first two wins although they did beat good teams, they did not win by large margins. During their first game, they allowed 31 points and in their second game they only scored 14. The Falcons on the other hand have played well in their first two games and their defense has been able to shut down good offenses like the CU Buffaloes. Air Force 35, Boise State 31.

The Buffs have been looking quite well this year even last week with they lost a close one against Air Force. The Buffs quarterback Steven Montez still did have a pretty good game last week despite the team’s close loss. The Buffs head offensive player completed 26 of 43 attempts for 220 yards and two key touchdowns in the last minutes of the game.

The Buffs however, do have a rough one next week as they play the Arizona State Sun Devils during a late night game this Saturday that starts at 8 p.m. ASU has been looking impressive this season as they also started their season out undefeated. The Sun Devils offense may prove to be too much for the Buffs defense.

The last two weeks we have seen some impressive performances by the Buffs offense, but their defense let both the Cornhuskers and Falcons score many points. The Buffs need to work on their defensive game so that they can give their offense a break. I think ASU will prove to be another team that is able to score many points on the Buffs’ defense and that the Sun Devils will win in another high-scoring match. Arizona State 36, Colorado 24