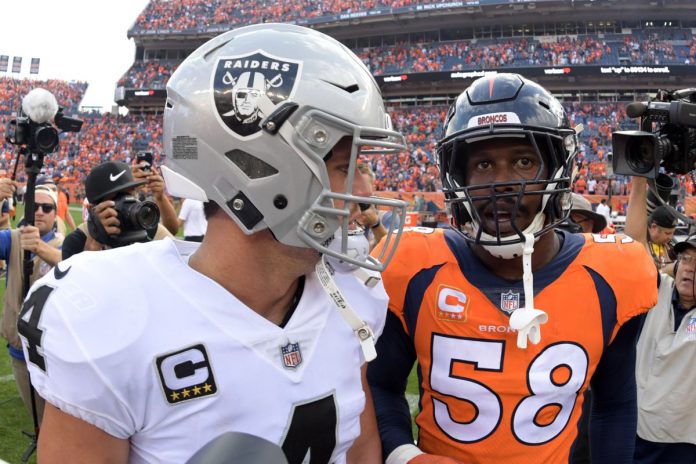 It’s time for the real thing. The Broncos open the regular season next Monday night against the dreaded and hated Oakland Raiders in Oakland. This is an infamous rivalry that has experienced a few letdowns in recent years but is now rearing its ugly head again.

First, a little news on cutting the rooster to 53 which ended last Saturday. The biggest shocker of the cuts was the release of quarterback Kevin Hogan. Well, maybe not that big a shocker, since he threw only four touchdowns and seven interceptions in his time with Denver. Add to that, his 50.1 quarterback rating and you see he was nothing more than Trevor Siemian 2.0. Brett Rypien also got the ax.

The latest from the NFL available quarterbacks looking for a job include Brian Hoyer. Hoyer was cut by the New England Patriots on Saturday. Hoyer has played in the Kyle Shanahan offense when both were in Cleveland, so he’s a good fit for the new Scangarello offense. Sources tell me the Broncos are very interested.

Whether Hoyer is picked up by the Broncos remains to be seen, but with the Hogan and Rypien cuts, it is clear the Broncos will be looking outside for a backup to Joe Flacco, now that Drew Lock is sidelined with that thumb injury for six to eight weeks.

Three former first-round picks were traded by Denver this weekend.

Broncos Versus The Raiders

Now to the prediction for the Raiders/Broncos Monday Night Football season opener on Sept. 9.

The Raiders made some moves in the offseason. The most notable was the addition of prima-donna wide receiver Antonio Brown. Brown was picked up from the Pittsburg Steelers. They also picked up aging wide-out Jordy Nelson from the Packers last March. The Raiders signed NFL bad boy offensive lineman, Richie Incognito. He’s a long shot to make it through the season without being suspended for dirty play, but that’s how the Raiders roll.

Derek Carr (AKA Johnny Rotten) is still the Raiders quarterback. Carr had his best year last year with a 68.9 percent completion, but his touchdown percentage was the worst of his career at 3.4 percent. With the addition of Brown, he could be a problem for the Bronco secondary. That depends on if he has time to throw the ball. But with pressure from Miller and Chubb, he won’t.

The biggest joke on the Raiders is their backup QB Nathan Peterman. The Peterman reality bus tour has left the station so many times, he needs a backup driver.

The best Peterman joke I’ve heard yet is , “The passes Peterman throws have become self-aware and now turn themselves over.” Raiders better pray Carr stays healthy.

On defense, the Raiders haven’t been the same since they traded Khalil Mack to the Chicago Bears. Much has been made about the Raiders non-existent pass rush in 2018, when they ranked last in the NFL managing only 13 sacks, 17 fewer than the next closest team.

They’ve tried to add some fixes to that problem through the draft and the addition of Vontaze Burfict. Burfict is the defensive equal to Incognito. They don’t come any worse when it comes to cheap shots and dirty play, but again, that’s how the Raiders roll.  He is the most heavily fined linebacker and has been banned three times in his seven-year career, including a four-game suspension for violating the league’s performance-enhancing drug policy last year when he was with the Bengals.

Don’t expect much improvement from them on defense.

What About Them Broncos?

Oh yeah, what about those Broncos?

It’s been a long and tiring preseason and the Broncos have had struggles in the red zone again.

But don’t let that get you down. The first string guys played very little in the preseason.

The Broncos are a much-improved team from last year. Second-year receivers Courtland Sutton, Tim Patrick, and DaeSean Hamilton are ready to make a mark this year, having put the rookie blues behind them. Emmanuel Sanders is back to 100 percent and will take a lot of double teams, clearing the lanes for the new guys.

The running back room is filled with talent, so much so they cut Khalfani Muhammad, who is going to be a steal for some team. Phillip Lindsay, Royce Freeman, and Devonte Booker round out the top three and with the addition of Theo Riddick things are looking good.

Did I mention Joe Flacco loves his tight ends? Oh year baby. This weapon has been missing from the Broncos arsenal for a LONG time. Not anymore! Rookie Noah Fant is the real deal. He’s going to be a star. Jeff Heuerman had his best year in 2018, and, barring injury, he’ll be the number one. Troy Fumagalli has had a good preseason and looks to be another target for Flacco.

Unfortunately, the word on Jake Butt is not good. He just can’t stay healthy and may wind up gone or on injured reserve.

Then there is the O-line. Also much improved. Garrett Bolles is learning how NOT to get holding penalties. This is a major improvement. The additions of rookie Dalton Risner and veteran JaWuan James has also beefed up the line. In fact, according to Pro Football Focus, the Broncos O-line is ranked 12th in the league heading into 2019.

On defense the Broncos are killers. Nough said.

The coaching staff is 100 percent better than under Vance Joseph. Fangio (AKA FANG) is going to be great as head coach.

So who wins Monday night?