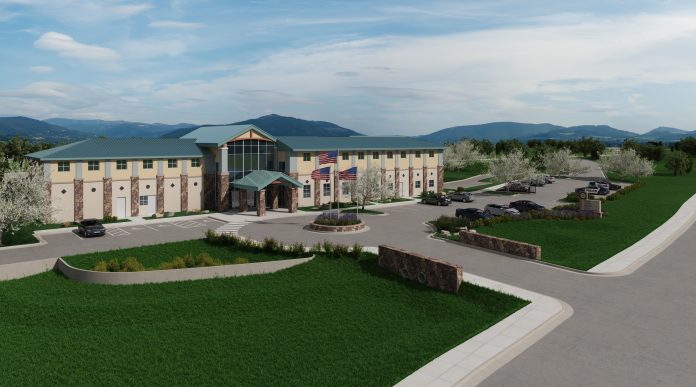 After grappling with a cramped facility for years and hearing complaints from residents, community leaders and deputies, the Teller County Sheriff’s Department will occupy a new $7.2 million home within the next year and a half.

Their new digs will represent a vastly expanded headquarters in Divide, representing a three-fold increase from the current office. Moreover, the new center will serve a variety of additional purposes, such as having a coroner’s office and modern new spaces for command, operations, dispatch, expanded E-911 abilities, administration and volunteer services. In addition, the two-story facility will maintain a higher visible presence on Hwy. 24.

The current facility entrance, which has been temporarily closed to the public, is often easy to miss. Parking also has often presented a mysterious quest, with most visitors using the nearby jail lot.

Those antiquated sheriff days may be screeching to a halt.

Last week, conceptual and strategic plans were unveiled by the architect for the project, Keystone Associates, Inc. of Colorado Springs, before the Teller County Commissioners. The firm played the lead role in the development of an $800,000 town hall building in Green Mountain Falls.

Robert Seever, the main principal representative of Keystone, described the project as a nine-month collaborative effort among his firm, the county’s public works department, and key Teller officials. He boasted that the county will end up with a facility that is quite attractive and practical and one meshing with the look of the area and meeting current and future needs. “We have to look to the future of the county,” said Seever, in describing a 20-year growth vision for the government.

At first glance, the new design is much more elaborate than what the county law enforcement office has experienced for the last several decades, with special manicured vegetation and grass and a commanding, almost majestic visible entrance off Hwy. 24.

But Seever cautioned that the planned facility is quite practical. “We have gone from the greens of Augusta (the site of the annual Masters Golf Tournament) to the rough of Augusta,” quipped Seever, in describing the realistic, natural-looking design.

More specifically, he said the design is aimed at giving the facility a more residential look, equipped with natural materials, earth tone color palette, heavy timber trusses and a green standing seam metal roof. It is a building that he believes fits the Divide architectural style.

The facility is aimed at serving the immediate needs of the department and their assortment of 25–plus deputies and employees, and serving many multi-purpose needs. With the expansion, the sheriff headquarters will have a 15,000=square-foot space area, representing nearly triple the size of what it currently has. The original sheriff’s department building in Divide was constructed in 1985 as a fire house.

The proposed timetable for the project calls for construction bids to be solicited in mid-September. If  the project progresses on schedule, construction should start in November, with the doors getting opened on the new sheriff cop shop in late 2020. Plans will be evaluated by Keystone Associates and a building committee comprised of key representatives from several county agencies, according to Seever.

The first key regulator test is slated for Sept. 10, when plans are submitted before the county planning commission.

Can We Start Tomorrow?

The commissioners’ response to the plans:  Can we start building this tomorrow?  The elected leaders heavily praised the work of Keystone Associates.  In addition, they noted that the project has been in the planning stages for years, and is a byproduct of the county’s conservative fiscal philosophy, allowing the government to pay for the needed expansion. “This is a good place to be.  It is paid for,” said Commission Chairman Norm Steen.

Commissioner Bob Campbell, who served on the board previously, echoed similar sentiments. “It is top-notch,” said Campbell.

At first glance, he admitted the $7.2 million sticker price may shock some residents. But Campbell reiterated that the county was able to afford the project by saving money in past years and in securing grants. In other words, he contended that the county and the sheriff’s department deserve this facility after taking many cost-saving measures. “The county has been pretty conservative. We have done a good job,” said the commissioner.

No community leaders or residents, attending last week’s meeting, disagreed with the fact that the current facility is not suitable for the agency’s needs. Until the county completes the new project, a temporary sheriff office entrance has been set up at the jail, across the street. This has created some confusion, based on comments made to TMJ News. But sheriff officials concede this is just a temporary situation.

“It is overdue,” said Commissioner Marc Dettenrieder, n describing the new project. He cited the difficulties the agency and county has struggled with in dealing with a cramped facility, and one with virtually no parking. “We made hard decisions (in the past),” he said.

The county leaders advocated the fact the facility can get constructed without a single cent of extra taxpayer dollars, unlike many other buildings financed by county governments throughout the state.

Plus, Steen made it clear the plans will proceed through the normal regulatory approval process. County officials could have opted out of this process due to the magnitude of the project, and the public purposes it would provide, but decided not to.

“We are paying for this with cash and complying with our own rules,” concluded Steen.