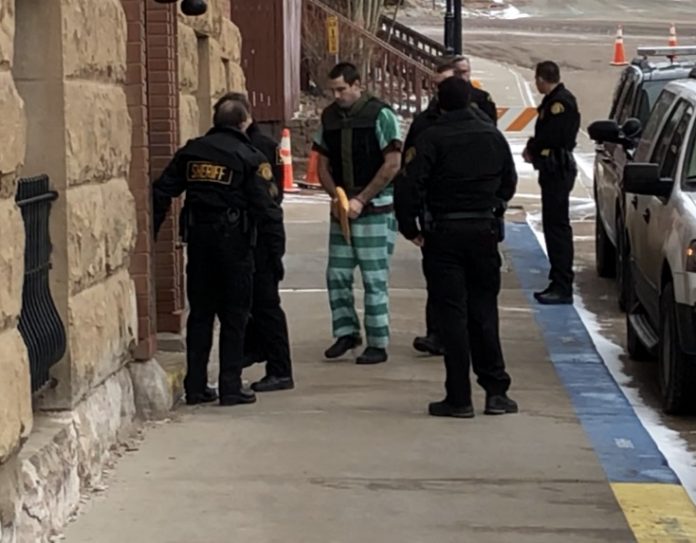 Many Fear Court and Law Enforcement Resources Getting Overloaded

The media circus surrounding the Patrick Frazee murder trial heads back to Cripple Creek this week as the suspected brutal killer of a Woodland Park mother is due in court once again.

Frazee is being tried for murder and other related crimes pertaining to the killing of Kelsey Berreth of Woodland Park around Thanksgiving 2018. Although her body was never found, authorities believe Frazee of Florissant, Berreth’s fiancé, beat her to death with a bat.

The clock is now ticking for Frazee’s forthcoming murder trial, scheduled to begin this fall, with the final bout of preliminary hearings.

This week, Frazee’s pre-trial motions get heard by the judge as he attends a motions hearing at 9 a.m. on Friday (August 23).

These hearings usually take place before a trial and they are designed to give the defendant a chance to have any motions filed to the court heard and decided upon by a judge. In many cases, these motions have to do with ruling out evidence in a case.

For example, a defendant could file a motion to suppress evidence in a case if they can provide proof that the search warrant did not exist or was achieved in an unlawful way. A defendant could also file a motion for the court to prevent certain things they said during trial to be used against them if they were not read their rights and properly informed of their right to remain silent.

In the Patrick Frazee case, it is hard to say what motions filed will be heard. So far, Frazee’s defense team has filed a motion to further restrict court media coverage. However, there could be more motions filed by the defense team that will be discussed and ruled on during the hearing this week, including possibly motions to suppress evidence in the case.

The last time Frazee was in court was last June when he attended a consumptive evidence hearing.

During that hearing a judge ruled that the prosecution team could destroy a tooth or fragment of a tooth found on Frazee’s property in order to test it for DNA. It has not been released to the public as to whether or not the consumptive evidence testing has yet been completed.

Shortly after Frazee’s last court appearance in June, his alleged accomplice and former mistress Krystal Lee Kenney, who will be testifying against him in the trial, also had a court appearance. On June 24, Kenney and her attorney attended a court date over the phone when Judge Scott Sells set a court date for Kenney to be sentenced for her felony as a part of her plea bargain.

The judge discussed multiple dates hoping to choose a day that would be after Kenney testifies against Frazee at his murder trial scheduled for this October. He finally picked December 2 hoping that the murder trial would be completed by the time Kenney faced the judge for her crime of tampering with evidence.

Kenney could have faced up to three years in prison for the class six felony. She pleaded guilty as part of a plea deal in exchange for testifying against Frazee.

Late last month, the deadline expired for the District Attorney’s Office to pursue the death penalty in the case. This means that the harshest sentence the prosecution can now seek in the case is life in prison without a chance of parole.

After the motions’ hearing this Friday, the next time Frazee will appear in the Teller County courthouse is at 8:15 a.m. on September 5. This will be for a status review with a mandatory appearance of the parties involved. The purpose of this review is to advise the court about the status of the case and how all of the parties involved wish to proceed.

After this review, Frazee will sit inside the Teller County Jail until his murder trial, which is slated to begin on October 28. The court estimates that the murder trial will last three weeks, and Frazee’s trial is planned to take up to eight hours a day, five days a week, starting the last Monday of October.

Many fear that the media circus surrounding the case, and the fact that the trial will take up a courtroom every day for three weeks will put a strain on the county court system and local law enforcement agencies. Rumors have circulated saying that the court will not be seeing many other cases during the trial which could result in the court system getting backed up.

The extended security that the defense team has asked for could also force local law enforcement agencies to utilize more resources. Many fear that deputies needed for patrolling other parts of the county will have to be used for security during the murder trial.