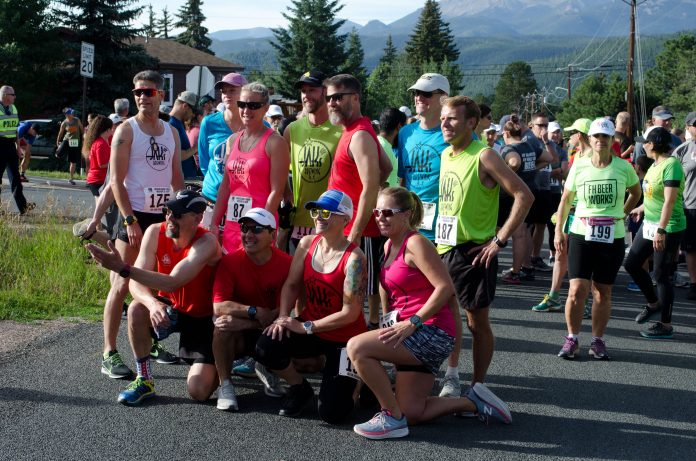 The 30th annual Woodland Park Mayor’s Cup drew the largest field of runners in the history of the event. More than 400 people competed in this year’s race, held last Saturday morning in downtown Woodland Park. Oddly enough, many who dashed around town were members of beer brewers’ running teams. This year’s event included teams from local brewers. Local brewer BierWerks sponsored a team, leading the way for other breweries to enter their teams. Plus, the Brewer’s Cup running group set the stage for a spree of teams to enter the competition. The Brewer’s Cup group is a beer/running competition, in partnership with the Pikes Peak Road Runners (PPRR). The event started at 8 a.m., with the running of the munchkins. Children 2-3 years-old ran a 50-yard sprint, followed by children ages 4-5 years-old running a 100-yard dash. 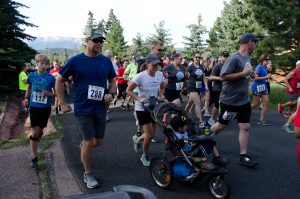 The 5K and 10K runners started at 8:30 a.m. The weather was ideal for the race. The sky was overcast and temperatures were in the mid-60s, but that didn’t keep the runners from working up a good sweat. Two new course records were broken in the Men’s Overall category at this year’s race. Brent Bailey broke the previous record in the Men’s 5K by :46, and Stephen VanGampleare shattered the previous record in the Men’s 10K by 1:05. Bailey, 33, of Colorado Springs, was the first male runner to complete the 5K with a time of 17:10. Elaina Bailey, 27, of Colorado Springs, was the first female to finish the 5K with a time of 21:14. The male winner of the more rigorous 10K race was 29 year-old Stephen VanGampleare, with a time of 34:25. Snagging the female 10K competition was 36-year-old Lauren Puretz of Colorado Springs with a time of 43:11. The best overall male and female racer in the 10K and 5K footrace division received trophies, with prized offered for many other competitive winners. This year’s event was sponsored by Charis Bible College, BierWerks, The UPS Store, Park State Bank & Trust, Spine Extremity Rehabilitation Center, Woodland Fitness Center, Dinosaur Resource Center, Pikes Peak Credit Union, UCHealth, Pikes Peak Regional Hospital, Vectra Bank, and Home Town Garage. 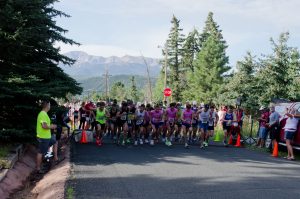 In addition, the Woodland Park Police Department, Teller County Search and Rescue, and Northeast Teller County Fire Protection District provided support. The race actually was started several decades ago by former Woodland Park Mayor Prentis Porter, who was an avid runner. Since then, the event has become a popular tradition in Woodland Park, and has attracted much interest by running groups in the region.