For the first time in recent memory, the Denver Broncos held a full pads practice at Mile High Stadium last Saturday, instead of the usual digs at Dove Valley.

As a salute to the fans, the practice was offered free of charge, (with tickets obtained through Ticketmaster). According to the Broncos, 27,234 fans showed up.

Here are my insider observations on how things went, starting with the good and progressing through the ugly. 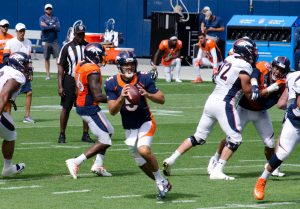 Joe Flacco seems very relaxed. After nine full practices, Flacco is settling in to his role as the leader of the team. For the most part, his passes were on target, although he only threw one deep ball to Courtland Sutton in the north end zone that Sutton dropped but Chris Harris Jr. was flagged for pass interference.

Before practice started, Flacco said, “The first time I stepped in here, you could tell the energy this place had. To come out here on a hot summer afternoon and have this many people show up, for what is most likely a boring practice, is pretty cool. It’s a lot of support for us.”

Quarterback heir apparent, Drew Lock had a good day, except for a pick he threw to Adam Gotsis, which Gotsis returned for a touchdown at the very end of practice. Coach Vic Fangio said about Lock, “He’s doing well. He had some good periods here today. I think he did his best work in the 7-on-7, which isn’t football, but it’s progress. (get used to Fang’s no-holds-barred commentary) You need to see that progress in 11-on-11 and then ultimately in games, but he’s getting better.”

The Broncos are deep at wide receiver. It’s going to be a tough challenge to see who makes the final cut in the receiver corps. They are all hauling in almost everything thrown their way. Sutton has been criticized for drops throughout practice this year, but the one he dropped in the end zone wasn’t his fault. This one was flagged for pass inference on Chris Harris Jr.

Perhaps one of the most interesting of the 2019 Bronco receivers is Juwann Winfree. Winfree was selected in the sixth round of the 2019 draft. He’s 6’3” and 215 pounds and hails from the University of Colorado. Winfree runs the 40-yard dash at 4.50 and has a huge 33” vertical jump. He’s a keeper.

Unfortunately, Running Back, Phillip Lindsay only played a few snaps due to an aggravated back from poor chiropractic treatment he received. Royce Freeman and Devontae Booker took up the slack. Freeman won on a route in the red zone for a touchdown and then made a one-handed catch in the flat (both from Flacco). He’s developing pass-catching skills.

The tight-end group is also showing some serious skills. The Bronco’s first round pick Tight End, Noah Fant is the real deal. He’s big, he’s fast, and he has great hands. Fant called his first experience in Broncos Stadium “amazing” and that it was a great atmosphere. He continued by saying he did not expect the amount of fans who actually show up.

Penalties and injuries. Coach Fangio said the Broncos had 12 penalties (eight offense/four defense) during 11-on-11, and he wasn’t happy about it. “We definitely have made some strides (in camp); where we haven’t are the penalties,” he said. “We had 12 penalties. Way too many. This team last year was 31st in the NFL in penalties called (125). That has to stop.”

Von Miller and WR Emmanuel Sanders were excused to attend the funeral of a mutual friend.

Butt and Cracraft went through a pre-practice conditioning workout on the stadium field.

Their really wasn’t any ugly, ugly play other than a few miscues, but an offensive bad play is a good defensive play, like Gotsis’ pick six from Lock.

The real ugly was the heat. Fans were allowed to park starting at 10:15 a.m. but the gates to the stadium didn’t open until 12:15 a.m. and the players didn’t take the field until 2:15 p,m. Fans had to mill about outside the stadium in near 90 degree heat and many crowded around the gates standing their like a bunch of sweating cattle. But hey, whaddaya want for nuttin? Bronco fans are tough.

The Broncos open the pre-season against the Atlanta Falcons this Thursday night. Game starts at 6 p.m. on NBC.