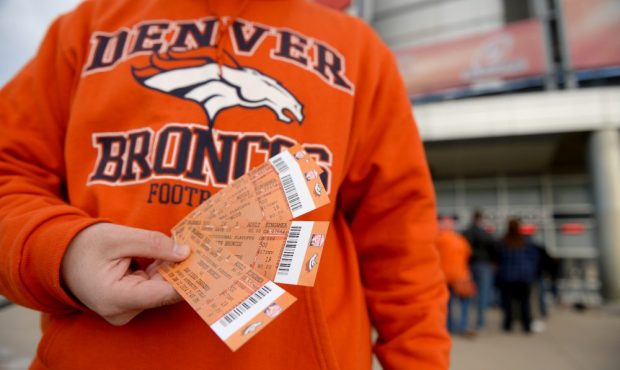 Most Colorado residents, including ones in Teller County, look forward to the start of the NFL season so that they can cheer on the Denver Broncos.

Many watch games televised on local television stations, while others try to catch the game live.

Unfortunately, unless you know someone who regularly purchases season tickets and you take the ones they don’t want to go to, getting tickets to watch a live home Broncos is not the easiest task. Denver Bronco regular season home games have sold out now for 381 straight times. Since 1970, the stadium that sits one mile above sea level has reached a saturation point, making getting tickets if you wait too long virtually impossible.

And if you wait until the regular NFL season begins, many of the tickets have been bought up already and only the worst of the worst seats exist. Also, these days many digital bots and online ticket scalper companies purchase many of the tickets, as soon as they go for sale mid-summer. This means that when us Bronco fans procrastinate and forget to think about game day tickets until the season starts, we get stuck with paying hundreds of dollars for tickets being re-sold.

Due to my procrastinating ways I have never gone to a Broncos game as an adult, even though I am an avid fan and a local sports journalist. I went to one professional NFL game at Mile High stadium back in the 1990s as a child, when one of my uncles came into town for an AT&T conference and scored a good deal on resale tickets at a Denver area bar.

But then, one time when I was attending college in Fort Collins, I had an old timer Broncos fan tell me about a little known secret when it came to scoring Bronco tickets. The diehard fan told me that every year it was possible to get Bronco home game tickets at half price. However, the only catch was that you had to plan ahead of time and purchase the tickets on the exact day that they went up for sale.

One year I did what the fan told me and I waited all summer until Ticketmaster announced when the first day of Bronco ticket sales would take place. Usually the date is only announced a couple of weeks before the first day they open up the box office.

I waited online right at the exact hour when I heard the sales started. I logged in right away and scored Broncos vs. Chiefs tickets for under $50. But, little did I realize when I purchased the one ticket that it was a Monday night game. Normally, that would not have been an issue, but that semester of my college career, I had decided to take a once-a-week class that only took place on Monday nights.

And again, normally I would have just skipped that one class and gone and seen my first Broncos game as an adult. But as I was soon to find out shortly before the game took place, I had one of four of the classes exams on the day of the game, so there was no way I could have skipped that class and gone to the game if I wanted to pass that course.

So, unfortunately, as proud as I was that I was able to score a half-price ticket, I was unable to attend the Broncos vs. Chiefs game. And I could not find anyone that wanted to go to the game by themselves, so the ticket I purchased just sat alone at the Will Call desk never to get picked up.

Ever since then, I always got too busy during our hustlin’ and bustlin’ Colorado summer season to remember to jump on half price tickets. Then, when football season kicked off, it seemed like ticket prices were too outrageously high to justify buying.

But this year I decided to change my ways. For some reason, I kept thinking about the half price ticket thing and about how I have never heard anyone talk about half price Bronco tickets since my college days in Fort Collins. I wondered if such a thing still existed.

So, early on in the summer, I decided to do some research and figure out if it was still possible to get half price Bronco tickets and when I could do it. I was able to find out that half price tickets are still available, but I could not figure out when until it was announced in June.

According to my research, it turns out that the Broncos are required to sell 2,000 tickets for each regular season home game at half price due to legislation, and an operating agreement with the Metropolitan Football Stadium District that came about following the construction of Broncos Stadium at Mile High. However, each household is limited to only four tickets, and they can only get the half off deal for one home game.

And, it used to be that those who wanted the deal were forced sitting at their computers, constantly clicking the refresh button on their computer’s browser. But this year Ticketmaster required those who wanted half price tickets to pre-register, so they could make sure the purchaser was a real human and not an automated bot or online ticket scalper.

So, on June 21,I found out that the day sales opened up were on July 16, but you had to pre-register with Ticketmaster before July 14. I got everything done and received the e-mail on the night of July 15, saying that I was approved to purchase the tickets the next day at 10 a.m.

So, when you are watching the famous rival match this October during a Thursday night game look-away up high into the upper part of the stands and you may be able to see myself and Mr. Bob Volpe (also of TMJ). I will make sure to bring a sign that says “TMJ News Is Here!”