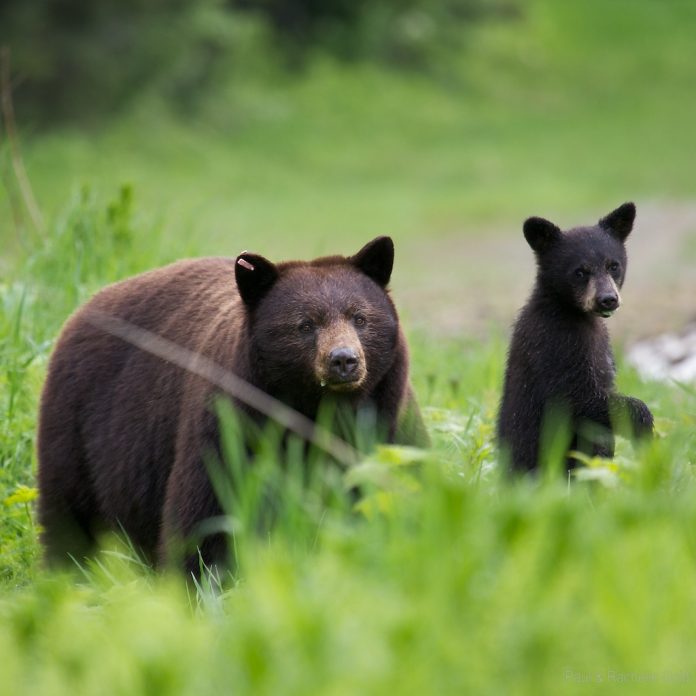 Nowadays, his distant cousins continue to wreak havoc across the nation including Colorado and the Ute Pass Region.

This summer, bear sightings have escalated in Teller County and the lower Ute Pass, as well as the rest of the state of Colorado. For example, a bear recently broke into a car in Boulder County and was able to shift the vehicle into neutral and roll it down the road. Although not quite as severe, a hike in bear incidents has been reported in the Pikes Peak region.

Once the weather warmed up this year, there have been numerous bear sightings across the state. Locally, social media pages have been blasted with pictures of bears traversing through people’s yards in Woodland Park and getting into trash cans.

One particular bear family consisting of a mother bear and two cubs has been seen roaming all over Woodland Park. Many people have spotted and taken pictures of the mammal family in their yards climbing trees, travelling through, or looking for food in their trash cans. Many driveways and roads in Green Mountain Falls are familiar hangouts for bears. Recently, a bear roamed in a carefree manner across a driveway of a TMJ staffer, in a matter that sent several dogs into a frantic barking spree. The bear was completely not intimidated by the presence of canines and residents.

Others have seen an increase in sightings of juvenile bears. Within the last month or two several residents have posted pictures bear smaller than average bears running around their yards. One local resident took a video of a younger bear climbing a tree in their front yard close to their front door in order to get some of that sugary fluid found in humming bird feeders.

According to Colorado Parks and Wildlife (CPW) District Wildlife Manager Tim Kroening, being “bear aware” can help save the lives of these beloved creatures. “Bears need your help more than ever, and so do I,” Kroening said. “Euthanizing a bear and sending its cubs to rehab is the worst part of my job. You can ensure I never have to carry out that sad duty again.”

He said that since bears have come out of hibernation this summer, CPW has responded to more than 40 calls related to bear sightings. However, luckily the wildlife officials have only been forced to euthanize one bear this season so far.

Kroening emphasized the importance of keeping bears out of your yard, and taking steps to keep them from coming back. Bears are meant to live in the desolate forests, but certain things people do can draw them into the cities to look for easy food sources such as human trash cans.

When bears are frequently spotted in the cities, they appear to pose a threat to humans and wildlife officials are forced to euthanize the animals. Therefore, keeping bears out of yards can save their lives by forcing them back into uninhabited areas where they belong.

Kroening says that there are a few safety tips residents can take in order to keep bears in the wild, which equates to saving their lives. Bears will stay in the city if they have easy access to food. By taking a few “bear aware” steps, humans can drive these creatures back into the wild.

First off, most people know that bears will head straight to trash cans that are left outside overnight. It is always a good idea to either have a “bear-proof” waste container, or to keep all garbage inside until it is time for the trash man to come.

According to Kroening, another mistake homeowners and residents is  to leave their garage doors open. “You could be sentencing some poor bear to death because you lured it into your garage and taught it to find food inside a human space,” the wildlife official said. “Perhaps the next garage it enters won’t be empty. Or a child will open the door from the house and surprise it.”

Bears are also attracted to other food sources in people’s yards, including bird seed and humming bird feeders. These items are nice to have in the summer time but they can attract these large mammals into yards.

If a bear is ever seen roaming around town, it is wise to take steps to scare them off. “No one is teaching the bear to be afraid of humans. Pretty soon these very intelligent animals start to associate the neighborhood with an easy meal,” Kroening said. “Bears will only stop coming around if all the attractants are gone. So it is critical that bird feeders, pet food, chicken food, trash and other attractants are secured where a bear cannot get to them.”

Kroening recommends that when people see bears, they should attempt to scare them away. One way to do this is to make a “rattle can” which consists of an empty aluminum can filled partly with gravel and taped shut.

“When a bear comes around, take a moment to enjoy it, even snap a photo from a safe distance, and then get your rattle cans out. Keep a few around the house near every door,” Kroening stated. “First yell: ‘Get out of here bear!’ so the bear realizes your home is occupied by a human. Then shake the rattle can aggressively. The noise is high-pitched and unpleasant.”