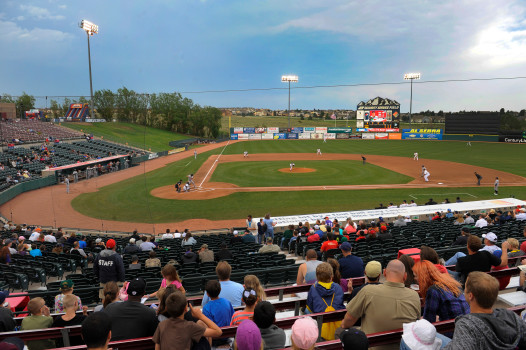 As many still mourn the sudden, unexpected disappearance of the beloved Colorado Springs Sky Sox, last month the Rocky Mountain Vibes swung at their first pitch of 2019 starting their inaugural season in the city at the UCHealth Park.

Their season started off pretty well and many thought the exciting young team would see success this season at their new venue. Their first home game attracted a huge crowd, as many baseball buffs enjoy the high scoring action. Plus, Vibes’ stadium hosts some of the familiar, zany and fun promotions of the past, with a new twist.

However, the month of July has thus far been rough for the Vibes as they only won three of their first 10 games of the month.

They started July off by beating the Grand Junction Rockies twice, but since then, they failed to come out ahead in a series. After their road trip to Colorado’s western slope, the Vibes played another away series against the Ogden Raptors.

The Raptors basically dominated the Vibes during the five-game stint and beat the Colorado Springs team in four out of the five matches. The devastation continued when the Vibes came home to take on the Billings Mustangs, and lost the first two games of the series.

The Vibes, which are part of the Milwaukee Brewers franchise, now have a losing record and have only won around a dozen games. The team has fallen to third place in their Pioneer League South.

The local rookie players are trailing to the Grand Junction Rockies, who are currently second place in the league with a record that is near .500. Taking first by a landslide, the Ogden Raptors have already won 20 games and are definitely a tough team to beat this season.

The Vibes start this week off with a four-game bout at home against the Great Falls Voyagers who are in a different league than the Vibes, and are also suffering from a losing season. Later in the week, the Vibes go back on the road to play the Ogden Raptors for a rough four-game series.

The Vibes then take one day off before they come back home on July 29 to play another series with the Orem Owlz. Hopefully, the Vibes can gain some momentum and start winning more games so that they can be contenders for the rookie league title.