This year for our ride in August, we are paying tribute to a wonderful man >>> ​He was a hard working man all of his life, a loving, caring family man, we called him Uncle Ralph. He loved to fish and camp, joke around with the kids, grandkids and great grand kids, we remember…Uncle Ralph. Ralph L. Wolaver Sr was born in 1931, Served in the Korean war as an Ambulance Driver and an avid supporter for all veterans associations. Uncle Ralph took ill a while ago, in and out of the VA hospital from Phoenix to Denver he would drive at 85 (that was his age, not the speed he drove). Uncle Ralph’s family was and is quite large, 11 children, 23 grandchildren and 23 great grandchildren, 5 sisters and many friends whom he considered family as well. Although he loved fishing, he hated eating fish, never liked the smell but fly fishing was his passion. 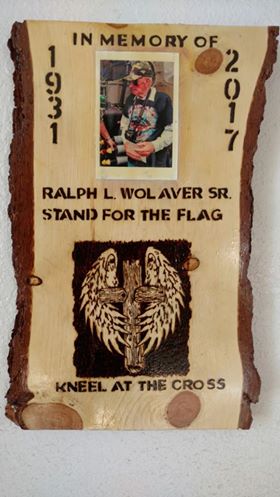 Uncle Ralph has left this world as we know it today, with many saddened hearts as he has left us with only a memory of how he cared for anyone who entered his life. He was preceded in death by his loving wife Evelyn, whom he was married 50 years, and also by 3 sisters, Juanita, Ethel and Earline. We will miss this great man dearly and with a strong memory we know he will be near, watching over us. Until we meet again, Uncle Ralph.