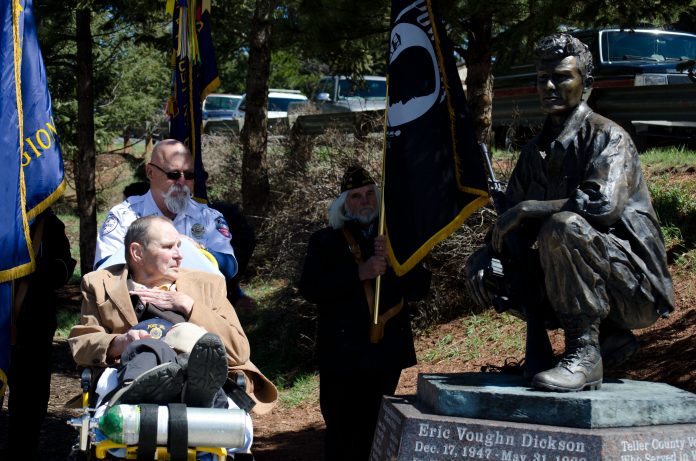 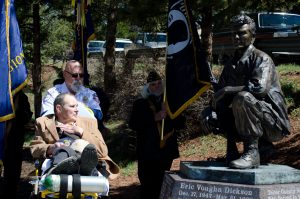 A dying veteran got a final chance to pay tributes to Eric Dickson, the area’ sole casualty from the Vietnam war and a classmate of his, during an emotional ceremony in Woodland Park last Saturday.

Seaman Steve Pflug, who is suffering from terminal lung cancer, was a classmate of Dickson at Woodland Park High School. He graduated with the class of 1966, one year ahead of Dickson, and served in the United States Navy during the time of the Vietnam war. But Pflug did not partake in the Vietnam conflict.

Thanks to the Sentimental Journey program by AMR ambulance service, Pflug was transported from his home in Wheat Ridge, Colorado, free of charge, to see the Dickson memorial last Saturday in Woodland Park.

Another classmate of Dickson’s, Steve Storrs, said, “His wish was always to come and see the memorial, but he couldn’t come last August for the dedication because he was too sick.”

Steve Plutt, who was also a classmate of Dickson, said, “All the while we were in the process of fund raising and completing the memorial to Eric, Mr. Pflug was confined at home and the hospitals being treated for aggressive lung cancer, he sadly had to miss the dedication.”

Pflug’s condition is critical and his illness prevents him from even sitting up. The ambulance attendants wheeled him on a gurney, down the walkway to the monument. He was overcome with joy and sadness and he broke out in tears at the sight and the many who turned out to pay their respects. 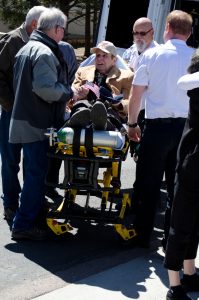 The crowd was dominated by both Pflug’s and Dickson’s classmates, the American Legion color guard, and many veterans.

Pflug’s brother Barry, who also suffered from the same aggressive lung cancer, was well enough to attend the memorial dedication, but died just a month later.

Eric Dickson was killed on May 31, 1968, in Quang Tri Province, South Vietnam by an explosive device while on patrol. He was 20 years old when he died. He was the only Woodland Park resident to be killed in that conflict. A memorial was established in his honor in Woodland Park, following a massive community drive that generated much support.