Last week, the Community Cupboard Food Pantry of Woodland Park, a place regarded as a key hub for those experiencing hard times, was reportedly broken into and robbed.

The incident has jolted many people in the community, with the timing of the theft occurring at a bad time.

According to a social media post, a large amount of perishable, canned and frozen foods were taken from the food pantry location during the burglary.  Currently, the robbery is under investigation by local police and no further information pertaining to the incident is being released.

According to their website, the organization’s goals are to “continue to help the working poor, unemployed, disabled, elderly, and homeless in the Teller County/Ute Pass areas to always have a meal on the table and to become more self-sufficient.” The food pantry works with local businesses, individuals, churches, schools, government and civic organizations to provide meals to people in need.

The website also stated some surprising facts about the hunger issue local residents face. Locally, “over 69 percent of all students attending the Victor/Cripple Creek Schools are on free/reduced meals;  over 32 percent in Woodland Park, 23 percent in the Ute Pass area, and 38 percent in Park County.” This means that there are a large amount of families in the region that face problems feeding their children. 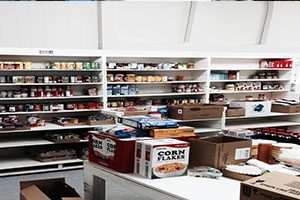 One program the organization was preparing to launch before the robbery was the Heart For Hunger campaign. The Heart For Hunger fundraiser is designed to help offset the statistics that prove that many children need food. The fundraiser’s purpose is to keep donations coming throughout the year and to raise awareness about the issue of hunger locally.

According to The Community Cupboard’s Executive Director Lisa Rawson, the incident was “heart-wrenching.” However, she did say that she has been appreciative of the support the community has given her since the robbery took place. She also said that they have implemented security measures to prevent robberies from taking place in the future.

The director was confident that the organization would be able to move forward and continue to serve the community.

She said that the organization could still use help replenishing their food stock but currently they are limited and unable to take a large number of food items. The best way to help the organization continue to provide food to families in need is to make monetary donations. To donate, contact the Community Cupboard at 414 N. Highway 67, Woodland Park, (719) 687-3663.