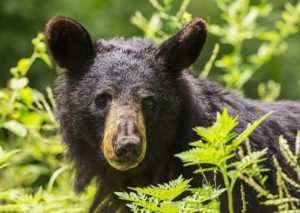 Now that spring is almost here and the weather is starting to warm up, bears begin to emerge from their winter slumber and start to prowl the area in search of food.

Even though bear and human interactions are more common in the late summer months, bears can also find their way into town during this time of year.

Locally, incidents with bears are quite common. Pictures of bears wandering around Teller County homes and cabins  can be seen often on social media pages. Several years ago, a resident in Green Mountain Falls shot and killed a bear as it came into his house and headed up the stairs toward a child’s room.

Recently, the Colorado Parks and Wildlife Division or CPW issued publicized media warnings, advising Colorado residents how to handle a growing  influx of bears. “Residents and visitors to bear country statewide need to do their part to help conserve our wildlife by working to reduce the chances of human-bear interactions,” the media warning stated.

One town in Colorado has already experienced a human-bear interaction this month. In Breckenridge during the first week of April, a car was completely destroyed due to improper food storage and the fact that the car’s owner forgot to lock the door.

“We stress it every year, small behaviors by people can make a huge difference for bears,” said Tom Davies, district wildlife manager in Summit County. “We need people to keep cars and garages locked, keep attractants out of reach and properly use and lock bear-proof trash cans. When you are living in bear country, you have a responsibility to follow ordinances and be conscientious. If you don’t, you should expect that we will be issuing warnings and fines.”

According to state wildlife officials, bears are sometimes seen in some parts of Colorado during the winter months. Some bears choose not to hibernate due to the easy access to food in Colorado towns.

Two bears in Breckenridge that didn’t hibernate also gained 60 pounds during the winter.

“Some bears near our cities don’t hibernate because there is a constant source of food ranging from garbage to bird feeders to dog food and whatever they can find in open garages,” said Frank McGee, area wildlife manager for the Pikes Peak region. “That is why we asked Manitou Springs to pass an ordinance to mandate bear-proof trash cans. And we believe it’s working. We’re making a similar effort with Colorado Springs.”

During the spring, bears usually feast on new plants and grass as it begins to grow. However, a late frost or prolonged dry weather can reduce the amount of natural vegetation available forcing bears to search for food in residential areas.

The CPW has offered tips for citizens to be “bear aware” year-round and to reduce human-bear encounters. 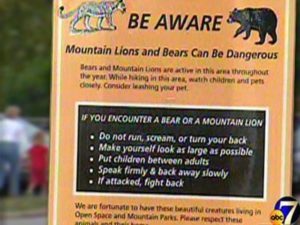 Tips to prevent human/bear conflicts include:

*Keep garbage in a well-secured enclosure and only put out garbage on the morning of pickup; bring in empty cans back inside before dark.

*Use a bear-resistant trash can or dumpster. These are available online or from your trash hauler.

*Clean all garbage cans regularly to keep them odor free. The scent of ammonia can deter bears.

*Take down all bird feeders by April 15 – bird feeders are a major source of bear/human conflicts. Birds don’t need to be fed during the spring and summer. Hang feeders again in mid-November.

*Keep garage doors and windows closed and locked, especially between dusk and dawn.

*Don’t leave attractants such as snacks, food wrappers, gum, or even scented hand lotions in your car; and always lock vehicle doors.

*Use bear boxes or bear-proof containers for food and scented items when camping.

*Don’t leave food outside while camping. If bear boxes aren’t available local all food in a vehicle.

*Review CPW’s Bearproofing Your Home Fact Sheet and conduct a home audit to be sure you are not  attracting bears to your property.

*Talk to your neighbors and kids about being bear aware.

For more information about Living with Bears in Colorado, visit https://cpw.state.co.us/bears.