Newmont Mining, which owns and operates the local Cripple Creek and Victor (CC&V) gold mine, holds regular community meetings to keep residents informed of their company’s ongoing operations, both in the district and on a national and international scale.

The meeting for March was originally scheduled earlier in March on the day that the blizzard hit the region, so it was rescheduled for last Wednesday.

Not surprisingly, the CC&V general manager, Mike Schaffner, was asked how fast the winds were on mine property the day of the near-record spring blizzard. The CC&V manager said that winds got up to over 80 miles per hour. Then, they were so strong that they blew down the mine’s main weather station and many of their wind speed sensors, according to Schaffner.

The Heritage Center forum started with presentations from mine employees about the merger that recently took place between Newmont and Barrick. According to Schaffner, Barrick attempted a hostile takeover and tried to buy Newmont out of all of its Nevada mining assets.

However, after negotiations between the two giant mining companies, Barrick ended up making a joint venture agreement that gives Barrick 61.5 percent share of all of the company’s assets in the state of Nevada. Newmont now only owns 38.5 percent of their former Nevada mining assets.

However, during the meeting the mine’s manager assured everyone that the joint venture would not have any impact on the CC&V mine. Since the deal only had to do with properties Newmont owned in Nevada, nothing will change with the assets Newmont controls in Colorado. Moreover, CC&V officials reassured the public that mining operations at the CC&V location would run business as usual and that the deal they have for refining concentrates in Nevada would still take place.

The mine manager then spent some time at last week’s meeting talking about the company’s recent underground operation plans in more detail. Schaffner started by explaining some history of mining in the area. He said that back in the day miners could only go so deep in certain areas where they found ore because they hit the water table. However, right around the time mining ceased in the area at the start of World War II in the early 1940’s, a tunnel was completed that drained the water table. 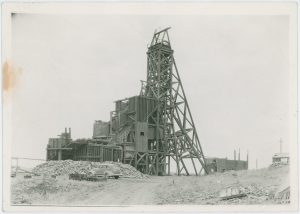 Newmont officials believe that there may be minable ore in areas deeper than the old timers could reach. However, to find the ore, the mining company must use similar methods to discover high quality gold as the miners in the early 1900’s did.

Back in the gold rush era of the late 1800s and early 1900s, miners would dig a shaft straight down into the ground where they thought there may be gold. They then would dig or blast out horizontal tunnels or drifts from their main shaft to figure out which way the vein was heading.

Recently, the mining company decided to invest $200 million in exploration operations, aimed at searching for gold in nearly the same way as miners did during the historic gold rush period. However, with today’s improved technology, the company can dig a decline that digs downward in a corkscrew like fashion instead of digging a straight shaft down into the earth. Once they get to the desired depth, they then will dig out drifts just like the miners did in the early gold rush days.

The expensive exploration efforts are expected to pay off when the company finds more ore deposits that have a high enough concentration of gold to refine and be profitable. Currently, the mining operations at CC&V are scheduled to cease in 2025. But, if the company finds more gold deposits, they could apply for permits that could extend the life of the mining operations in the Cripple Creek and Victor area.

The Newmont forum also featured talks from directors of various departments. One Newmont representative talked about the continuation of phase two of the Valley Leach Field 2 construction project that was halted in 2016. CC&V officials said that the construction project will bring 65 sub-contracted employees to the area.

The representatives from the mine also talked about their continuous reclamation efforts.

They discussed their most recent reclamation project that included reclaiming over seven acres of land near Teller 821. The mine manager warned the public that the deer have enjoyed eating the grass planted as a part of the reclamation efforts. As a result, he told residents to watch for wild animals when driving down the county road.