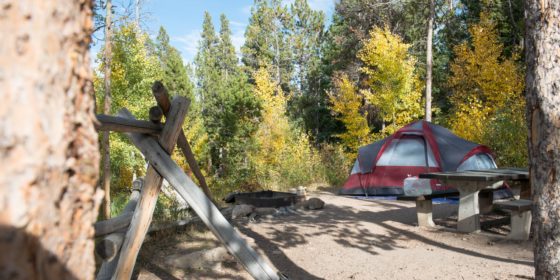 The campaign to crack down on vagrant campers, homeless folks and transients sleeping in cars and trucks has taken a huge step forward in Teller County—at least in the political and legal arena.

Plus, officials say new enforcement teeth can now be applied in efforts to combat people living outdoors on vacant lands permanently in unsanitary conditions, at the displeasure of their neighbors or adjacent property owners.

The rules don’t deviate too much from the previous overall goal of allowing camping on individual properties for 60 days per year, whether that activity is being done by the land owners, friends or their  family members

However, new camping fee licenses must be obtained for anyone camping on vacant property for more than 14 days.  In addition, campers must furnish dump receipts in disposing of sewage to assure they are abiding by proper sanitation standards, along with following many other regulations.  And all properties in unincorporated areas are restricted to housing only two camping units.

Also, a few more regulations are clarified with the goal of combating a growing problem with vagrant campers. For example, the rules outline what outdoor camping consists of. Designated camping units are defined now as a “recreational vehicle, camp trailer, 5th wheel or tent.”

Gone are days of people sleeping in their cars or pick-up trucks at vacant parcels for an extended period, according to the new rules.

With the new regulations, Teller officials believe they will have more teeth in their anti-vagrant stance than in the past, with some violations often extending for several years

Teller County Planner Dan Williams described the new rules as a balance between protecting private property rights and respecting health and safety concerns. “We are not abridging rights,” said Williams during a commissioner hearing last week. “We are trying to avoid vagrancy problems.”

He urged anyone to take a drive down Shelf problem, outside Cripple Creek, and see first-hand the horrific sites associated with illegal camping, with individuals making permanent residents out of unapproved living units in a finite area. “It is tragic,” said Williams, who said there is help for these individuals through the Department of Human Services

According to Teller County Community Development Director Lynda Morgan, the county only had maybe a handful of complaints regarding illegal camping violations on an annual basis. Now, she said the rate has exploded to the high teens, with officials hearing more horror stories about this type of illegal living activity. Williams even described one case involving an individual living in a cave in a subdivision and situations with more than 25 people residing in an extremely tiny area.

“It is society,” said Morgan, who attributed these problems to a variety of factors, such as the county’s location next to Colorado Springs.

In his staff report, Williams went into more details about the situation with vagrant campers, an issue that has led to many meetings with the planning commission. “Staff has not brought this matter for consideration in a capricious manner.  There is a real problem with vagrancy and with the use of camping units for permanent residential purposes in Teller County and in surrounding counties,” he stated in a report. “Our close proximity to the Front Range and a large percentage of public land in Teller County has made us a target county for what has been occurring. The problem exists today and is getting worse.”

Without firmer rules, Williams maintained the county may lose the battle in protecting the health and safety of county residents. He noted that Teller now bustles with 300 subdivisions in the unincorporated areas, including properties with many improvements.

The Need for Common Sense

The planner’s recommendations mostly got a positive response. However, Commission Chairman Marc Dettenrieder questioned the impact for visitors and campers who may not be able to travel easily to a county office to obtain the necessary permits while spending time outdoors.

He specifically asked about the new camping permits for individuals exceeding the 14-day initial limit, and how the fees compared to those in other counties He wanted to make the process easy for individuals camping in the area.

The commission chairman also took issue a little with the new restrictions for camping units. He stated that in his younger days, he may have slept overnight in  a car equipped for the outdoors. Dettenrieder questioned the merit of these camping unit restrictions.

“We would have common sense on the table,” replied Williams.  “We will work with people.” The planner also noted that even with the new rules, Teller County is much more lenient than other neighboring counties, when it comes to camping rules.

He explained to the board that the new rules are aimed, in some ways, to effectively crack down on abuses. Currently, he admitted the county’s efforts to deal with illegal camping have had mediocre success, with some cases extending for several years. He said the new permits are more of a way for the county to document violations.

In the past, he indicated that it has become a ‘he said, she said’ situation regarding illegal camping violations.

A few residents attended the hearing and mostly supported the tighter rules. If anything, they wanted to see more enforcement. A group of residents from the Turkey Rock subdivision wanted to make sure that no commercial camping activity would occur in subdivisions.

The issue, though, is bound to trigger more debate.

The lack of affordable housing in the county has often fueled some of the vagrancy problems, according to certain property owners and critics of the county’s new rules. Some land owners, meanwhile, have accused county officials of trying to turn Teller County into a more upscale area. Also, some court cases have questioned the right of officials to deny a property owner’s right to camp on their vacant land, if they can’t obtain housing. This is a fight that has created many different legal interpretations.

On the other side of the fence, the county did receive letters from rural residents, who say they strongly support private property rights, but endorse the needed changes.

Williams lauded the commissioners for taking the first step. “You have a road map now,” said the planner.

At the same time, he assured the commissioners and the public that the county is not altering its complaint-driven policy of enforcing ordinances, such as camping. He said the county staffers are not going to actively pursue violators, and would handle these cases based on complaints they receive.