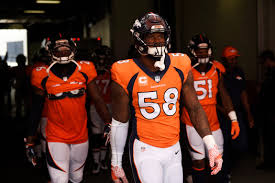 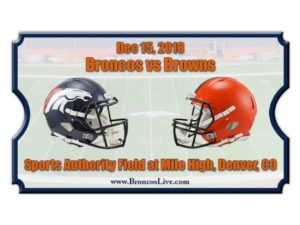 ~ by Bob Volpe ~
The Broncos host the Cleveland Browns this week.

It’s that time of the NFL season when the tough get going, and the weak go home. With three
games remaining in the regular season, it’s more than a do or die for the Broncos. Losing to the Niners last week pretty much put the Broncos out of the playoff picture, since the remaining wildcard
hunters all won last week. It would now take a total train wreck of wild card contenders, even if the Broncos win their last three games.

The Browns come to town with a 5-8-1 record having beaten the Carolina Panthers last week.

The Panthers didn’t have an easy time with the Browns. In the first half, Browns quarterback Baker Mayfield completed 8 of 10 passes for 176 yards and one touchdown. Mayfield can throw the ball deep. He hit Browns number one receiver, Jarvis Landry, for a 51 yard TD.

Ultimately, the Browns scored nine unanswered points in the fourth quarter to win their fifth game of the season.

The Browns are a better team than their record indicates, and they should be. They’ve spent the last several years picking first in the draft. The only thing that has kept them from being a better team to
this point is their picking lousy quarterback in the first round.

That is until now. The Browns first pick in last year’s draft was Mayfield and he’s the real deal.
Mayfield is a scrappy competitor. His ‘never say die’ attitude and confidence may well get the Browns to the playoffs next year.  He is also playing behind the highest paid offensive line in the NFL.

Nick Chubb, second cousin to Bronco linebacker Bradley Chubb, is the Browns primary rushing threat. Chubb is on pace to break 1,000 yards in his rookie year. As of last week, Chubb has surpassed 700 yards
rushing. He is also a threat in the passing game, averaging over five yards per catch.

In the passing game, Jarvis Landry is the Browns leading receiver. He has been the deep threat for Mayfield. Landry is averaging 11.6 yards per catch, but has only two TD’s on the year.

On the other side of the ball, the Broncos losing Chris Harris Jr. and Emmanuel Sanders hurt badly. Against the Niners, the Broncos, once again, didn’t show up until the second half. That’s two games in a
row. It’s a pretty much given that if you only play half a game, you’re going to lose.

There was a lot of miscommunication among the rookies who had to step up in the Niner game on both defense and offense. Broncos quarterback Case Keenum was off target too much and poor Phillip Lindsey never had a chance with a Niner defender constantly in his back pocket. Holding Lindsey to 30 yards is something no one has been able to do all season, but that is all he got last week.
The upcoming game is not looking good for the Broncos. Expecting six rookies to come in and play at a high level is a tough task, and it showed last week. Add to that more mistakes by Head Coach Vance Joseph and the Broncos could easily be back sliding again.

Whether the Broncos can rebound from the loss to the Niners is a long shot.

TMJ Pick: Sorry to say, I have to go with the hot hand of Baker Mayfield; Browns will win, 27-14.