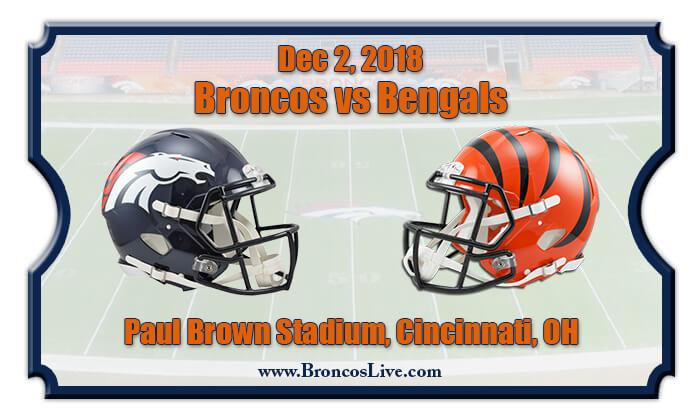 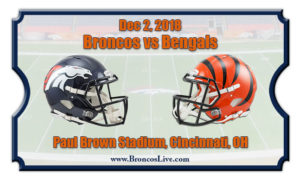 ~ by Bob Volpe ~
The Broncos go on the road this week to face the 5-6 Cincinnati Bengals, after upsetting the number two seed Pittsburgh Steelers on Sunday afternoon 24-17.

The Bengals started out the season winning four of their first five games. Now they are on a three-game losing streak, having been shellacked by the Browns last week.

Bengals quarterback Andy Dalton is getting long in the tooth at 31 years old. This year he’s thrown 20 TD’s and 11 interceptions.

Statistically, the Bengals have been run over by every team they’ve played even in their wins, which came against poor teams. They’ve been out passed and out rushed by nearly 1000 yards in both categories in each game this season. They haven’t beat one team with a winning record all year either.

On paper, the Broncos have a better passing and rushing game than the Bengals. The Broncos also lead the Bengals in total yards per game.

The Bengals offensive line is porous. Dalton has been sacked 21 times. Against the hot Bronco pass rush, look for Dalton to 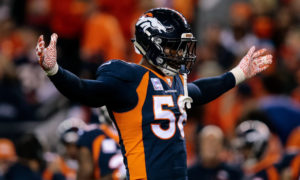 be running for his life. Last week after a bad snap in the third quarter, resulted in
a lost fumble, Dalton was replaced by 2016 sixth round pick, Jeff Driskel, who tried unsuccessfully to bring the Bengals back from a 35-14 hole.

It will be interesting to see who starts at quarterback for the Bengals this week. The Bengal defense has racked up 24 sacks on opponents. While this may seem to be a problem for the Broncos, the scabbed together Bronco offensive line has gelled well and protection for Keenum has improved.

The Bengals need this one, but so do the Broncos. Since the humiliating loss against the Jets, the Broncos have been close in every one of  three consecutive losses against playoff bound teams. This team is on the rise and nobody is paying attention. That’s probably a good thing.

Big Ben found out last week he can’t take the Bronco defense for granted. The Broncos gave up a lot of yards, but when the going got tough, the Broncos got going. Denver’s defense was plus-4 in the turnover battle and sacked one of the all-time great escape artists twice.

The Bronco offensive line, while scabbed together due to injury, is doing a great job keeping Keenum’s jersey clean. Keenum is finally being used to do what he does best, play action and rolling to his
right. Keenum isn’t flashy but he fights to the end. Two TD’s last week with no interceptions is what we need from him and that’s what he got against the Steelers.

I can’t say enough about Phillip Lindsey. Lindsey has scored 5 TD’s in the last six games.

Then there are the tight ends. The Broncos finally realized the tight ends are allowed to catch the ball, as well as block. Both Heuerman and Lacosse are becoming weapons for Keenum’s offense.

Against an explosive Steeler offense the Bronco defense bent but didn’t break. Roethlisberger threw the ball 56 times last week for 462 yards in a losing effort. This was due to the defense holding them out of the end zone for most of the game.

Dalton is no match for the Bronco defense if he even plays this week. His receiving corps isn’t half as good as the Steelers either.

TMJ Pick: The Broncos will win their last two road games and they’ll win the showdown against the Bengals 31-10