The Broncos have had a 10-day break after crushing the Arizona Cardinals 42-10 on Thursday Night Football last week.

Now the Broncos face the Kansas City Chiefs in Arrowhead Stadium next Sunday. In their last meeting, on October 1, the Broncos lost a heartbreaker to the Chiefs 27-23. If the Broncos can somehow pull a win out of their hat next Sunday, they will be 1-1 against this AFC West rival and 2-1 in the division.

A win will go a long way towards positioning the Broncos for a possible Wild Card spot. A loss will likely put a playoff game out of reach barring a sudden collapse of other teams in the AFC.

The Chiefs are, arguably, the hottest team in the AFC at the moment, despite a loss to the Patriots 40-43, in a shootout on October 14. 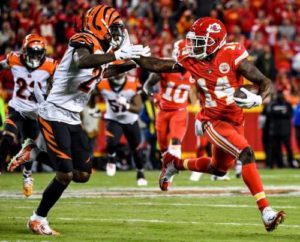 On Sunday Night Football last week, the Chiefs dismantled the Bengals, who are in first place in the AFC North. When the Broncos last played the Chiefs, they showed multiple defenses that had the Chiefs on their heels. The Broncs held Patrick Mahomes to one touchdown pass and all of the  Chiefs receivers under 100 yards.

Last year’s rushing leader Kareem Hunt managed to get 121 yards rushing, but he was not the major factor that he usually is. Had Broncos quarterback Case Keenum not overthrown Demaryius Thomas late in the game, the outcome of that meeting could have gone to the Broncos.

Except for the bottom line of being number 1 in the AFC West, the Chiefs stats don’t jive with their success. The Chiefs are number one in scoring, but their rushing stats put them at 15 in the league. Now
that may still be a problem if the Broncos fall back into the team they were against the Jets and Rams.

While the Chiefs are an explosive offensive team, they can be beat.

Despite the thumping they gave the Bengals, the Chief’s defense is still last in the league in that department. The Chiefs average just over 35 points per game, but their defense allows and average of 29 points per game. If the Broncos use Keenum with play action passes and a little razzle dazzle, they can put up points on the Chiefs.

Phillip Lindsey is the Broncos best rusher. He has the speed and agility to extend drives and work the clock. A major key to beating the Chiefs is to keep Mahomes on the bench. Clock management and long
time-consuming drives can lead to a Bronco win next week.

When the Chiefs lost to the Pats, Mahomes nearly won the game with a long pass to a wide open receiver, but left too much time on the clock and the old goat Brady finished them off with under two minutes remaining.

What the Chiefs do best is big plays. Mahomes is becoming a master at extending plays with his feet then finding open receivers who shake off coverage. He has an amazingly strong arm. In many ways he reminds me of John Elway in his heyday.

If the Broncos can hold Kareem Hunt in check, Mahomes could wind up throwing a couple INT’s either directly or on tipped balls.

Bottom Line
This is a division game and those are always dogfights. The Chiefs have the advantage of playing in Arrowhead, one of the toughest stadiums to play in the NFL. The Chief’s head coach Andy Reed, has put
together an offense that is deceptive and explosive. His playbook must be over 1,000 pages and he uses all of it.