Despite giving up a bunch of big plays, the Broncos lost a squeaker to the Rams last week 23-20.

So many “what ifs” turned a possible win into a loss again. Regardless, the Broncos didn’t get blown out, as many, included yours truly thought.

This week the Broncos travel to the desert to play the Arizona Cardinals on Thursday night.

The Cards lost to the Vikings last week 27-14 and fell to 1-5 on the season. There is no way in God’ green earth why the Broncos shouldn’t come away with a win this week. But wait! We said that about the Jets
too. So, looking at the match up, this one really should be a Bronco win. 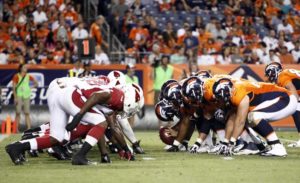 The Cards benched QB Sam Bradford for rookie Josh Rosen earlier this year. Rosen hasn’t been having as much success as some of the other 2017 rookie quarterback class. He threw for 241 yards against the
Vikes, but didn’t manage one TD pass and threw one INT. Rosen has only thrown four TD’s in the last six games and is averaging only 121 yards passing per game. His net yards per pass are 6.5 yards per pass.

Their rushing game rests on the shoulders of David Johnson, who is only averaging 3.3 yards per carry. Johnson accounts for all four of the Cards rushing TD’s this season, but their defense has allowed eight
rushing TD’s.

The veteran receiver Larry Fitzgerald is getting long in the tooth. He’s been held out of the end zone all season. Fitzgerald’s heir apparent, rookie receiver Christian Kirk is still getting his sea
legs. In the Cards only win this season against the 49er’s, Kirk averaged 28 yards per catch, but in the losses, he’s only averaged nine yards per catch.

Cardinal tight end Ricky Seals-Jones is 6’5” and 243 pounds. The Broncos will have to keep an eye on him over the middle in third down situations. He’s no Gronk, but he can still pick up 3rd downs if not
covered. He’s caught 24 passes this year for 123 yards and one TD.

The Cardinal defense has a combined 35 takeaways this season.

The Broncos have struggled against strong defenses this year and quarterback Case Keenum has a tendency to toss INT’s to the other team. Keenum threw his eighth INT against the Rams last week. On the season, he is 5 TD’s to 8 INT’s. He’s been sacked 13 times. Somehow Keenum manages to play well when it doesn’t matter. He has problems hitting open targets in critical situations, usually with an overthrown ball. He did manage two TD passes against the Rams and nearly engineered a comeback last week.

Still the Bronco passing game isn’t firing on all cylinders.

Coaching continues to be a weakness for the Broncos.  Keenum’s strength is play action, but the coaching staff continues to try and make him a pocket passer. If changes aren’t made, he’ll struggle again against the Cardinal rush.