The Teller County Planning Commission considered changes to land use regulations regarding camping and temporary housing at this month’s regular meeting.

But following a spirited discussion, capped by concerns over a reported increase in vagrant campers and homeless camps and squatters, the commission decided to retreat to the drawing board.

The proposed changes are in response to unclear standards and ambiguity in current regulations, code enforcement trends, lessons learned, and to conform to state statues.

According to the commission, these changes will apply camping regulations county-wide in all unincorporated Teller County. They also will provide better clarity for both improved and unimproved land, and will apply to tracts, mining claims, lots and parcels. Items covered in the proposal for camping on vacant property include the definition of a camping unit, the number of camping units
allowable on a property, permits required, compliance with sanitary, trash and utilities standards, as well as limiting the length of time allowed to camp, to 60 days per year.

Improved property is defined as having a permanent residence, with permanent water supply, and sewer system.

Property owners on improved property are permitted to allow non-paying guests, and family members to camp on their property as long as there is no commercial activity associated with the camping. Camping will be limited to 15 consecutive days, and no more than 30 days in any
six-month period.

Another topic that has generated much concern, especially in lieu of the current housing crunch, deals with the definition of temporary housing.

A property owner may live on their property during the construction of a dwelling on the same property with a temporary housing permit.

Conditions to obtain a temporary housing permit include an approved water supply, sewer, and electrical installation on the property. In addition, the property owner must have a building permit, and no more than 180 days must elapse between inspections required by the building department.

The temporary housing must be a Colorado licensed RV, trailer, motor home or similar unit. These regulations do not permit, lean-tos, campers, trailers, tents, motor homes, RV’s, or any such appliance as a permanent residence. 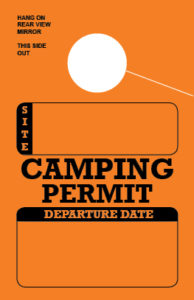 During the discussion period, the commissioners debated over language, time allowed by family members to camp, and specific terminology in the proposal that raised many questions. Of particular confusion was a regulation was that a camper must apply for a permit when “approaching” the 60-day limit. Commission Chairman Mike Haase questioned, “Why is there a need for a camping permit at all, except for timing purposes.”

Further discussion ensued over exactly how to keep track of the day’s people are camping if they don’t apply for a permit at all. This leaves open the possibility that someone may file a complaint against
a neighbor camping, saying for instance, they have been there for six months, when the accused claims they only started camping a few days ago. Then, it becomes a matter of who to believe.

Apparently, the main objective of these changes is to crack down on squatters and vagrants. The commission noted a marked increase in people camping on vacant land even through the winter months in the last few years.

A resident that supports the changes stated a need for enforcement in lieu of expanding vagrancy and homeless camps.

He considers this to be a health and safety issue, due to unsanitary conditions in some of these camps.

The next person to speak took a vastly different stand. “I think this is totally unnecessary. If a person wants to camp on their property, they ought to be able to do so.”

He did acknowledge there are issues with vagrancy. He also had issues with the vague nature of the language and how it did not take into consideration the size of properties, the topography, visibility to the public, and the limit of two campers on a property.

The objector said, “What if a bunch of my military buddies want to come out here and camp on my property to hunt, and they all bring a trailer or RV?” He also thinks it is ridiculous to have to get a
camping permit for a trip lasting less than a week.

Ultimately, the commission decided they need to go back to the drawing board and come up with better language and to address concerns raised by those speaking during public comment.

The commission hopes to have a new draft in place for the November 13 meeting.