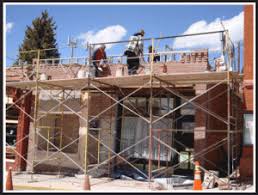 “Carpenter Bob” Provides Insight Into the Early, Rough and Tumble Years of Gambling

Before the introduction of gaming in Cripple Creek, the city was a crumbling mass of run-down buildings suffering from the ravages of time.

When Colorado voters approved limited stakes gambling for Cripple Creek, Central City and Black Hawk in 1991, the Cripple Creek Historical Preservation Commission was formed
and strict requirements were placed on the renovation of the city’s historic district buildings.

We also faced many construction challenges. When we arrived at a building site to begin work, each building had been completely gutted down to the brick walls, aging beams, and posts holding the roofs up. 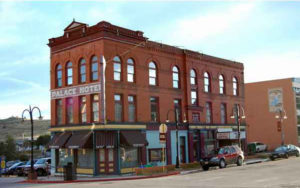 All four of the buildings I worked on were what were called “shotgun buildings.” This referred to the narrow width and long depth of the buildings. The long narrow buildings were all brick construction that dated back 100 years. We could scrape the brick with a fingernail and reduce it to sand.

Nailing thin strips of wood, to attach dry wall to, was difficult even with the application of the industries’ strongest commercial adhesives.

Add to that, the walls that ran the length of the building looked like vertical waves on a bay, which made creating a surface suitable to hang drywall extremely difficult.

Then there was the historical preservation commission to deal with, often called the hysterical society. This group was overseen by the town’s first historic preservation director, Brian Levine, who sought stern rules. Brian gained a few nicknames, even by TMJ journaists, that can’t be repeated.

These diligent connoisseurs of history would show up on site with photos of the building that were taken back in the hay-day of the booming city. We were instructed to “make it look like this.” 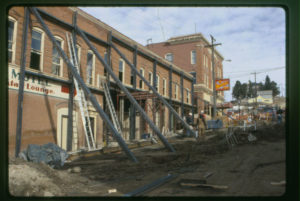 Unfortunately, current building codes required us to come up with work around techniques to keep the historic character, but still meet building code standards. Aging wooden beams and posts were replaced with steel I-beams and metal posts, which then had to be boxed in with era consistent wood. Often these fixes were larger than the originals and were frowned upon by the historical commission enforcers.

Sometimes raging arguments ensued over historical versus current building standards. We always found a happy medium to the issues and added a thing here and there to satisfy the history buffs.

The Turf Club, which has since been consumed by the Bronco Billy’s expansion, was one of those arguments. The large steel I-beam that was installed the length of the building extended out into the entrance foyer much to the dismay of the historians. We came up with a solution by boxing in the beam with wood and hanging a Victorian chandelier from it. VOLIA!

Madam June’s, which is located across the street from the courthouse, and is now an office building, was our greatest challenge. All that was left when we got to the site was brick walls and bowed brick columns in front. The historical commission showed up with a fist full of old photos of the exterior and interior and cut us loose to again, “make it look like this.” Some of the interior photos showed beautiful oak moldings that are no longer made by any manufacture.

We had to take the photos to a milling outfit in Denver, where they cut special knives for their shaper machines to duplicate the moldings.

The brick columns in the front had to be made strictly decorative, as they could not perform their original job as supports for the upper level of the building. Again steel I-beams were used, supported by steel posts, which were then boxed and trimmed with decorative moldings.

Since the early years, much has changed along the historic preservation front. The town has developed several signature parking garages, structures that were frowned upon at the advent of gaming. More scrutiny, though, has occurred for projects that get started and then are abandoned. More 19th century homes have reaped the advantages of historic grants.

However, the addition of the 33-story Ameristar resort in Black Hawk drastically changed the playing field for all three gaming towns, with historic preservation taking a backseat Many rules were thrown out the window, and the state showed little enthusiasm towards enforcing obvious historic violations in Black Hawk.

Today, Cripple Creek has a thriving gambling business, and historic preservation is once again facing continual challenges. The recent demolition of an 1895 house to make room for a parking garage for the Bronco Billy’s expansion has raised the hackles of historic preservationists. The issue came to a head at the last week’s city council meeting with plans for more scrutiny regarding private homes located in the historic district, so residents would have more say over demolition requests (see related story).

As the town celebrates the 27th anniversary of limited states gaming, historic preservation is still a focal topic.