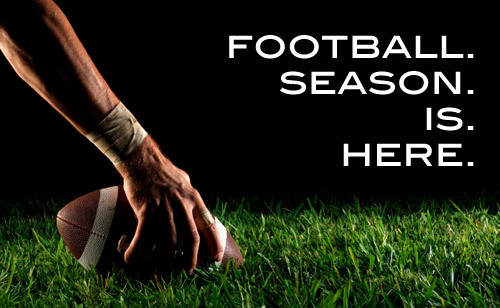 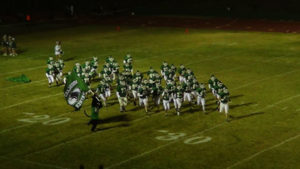 Panther football officially kicked off last Friday as the WP boys headed out east to Conifer.

However, hopefully, their season opener away game was not a good testament of how the season will go for the pigskin squad. As the 35-12 score demonstrated, the Panther varsity boys had trouble on both offense and defense during their first game.

The first quarter of the game started out well for the Panthers as they won the right to receive their first kickoff for 2018. Their offense came out and punted twice but then luck turned in favor of the team. The Conifer Lobos struggled offensively at first as well when they turned the ball over to the Panthers on downs and then fumbled the ball.

The Panthers were able to recover the fumble and give their offense good field advantage on the Conifer 30 yard line. The Panther offense quickly answered with a touchdown pass from quarterback Michael Shrum to Bryson Cox.

Once the second quarter started though, the Panther boys started to slip. The start of the quarter was riddled with turnovers on both sides when the Lobos found their rhythm offensively. The Lobos were able to capitalize off of a fumble recovery and scored a touchdown to tie the score. The Lobos then scored two more unanswered touchdowns making the score 21-6 at halftime.

After the first half, the Panthers continued to struggle and allowed two more touchdowns. The boys scored a touchdown late in the fourth quarter but it proved to be too little too late.

Hopefully, the Panther boys can get their team dialed in better for next week. This Friday the Panthers take on the always tough Sierra Stallions. The game this week is the Panthers’ first home game. More details will be unveiled following the district’s annual media day. 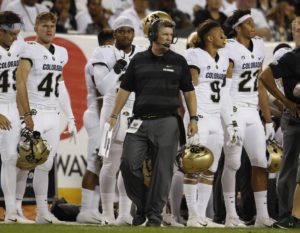 Well, now is about when I start singing in my head “It’s the most wonderful time of the year!” as football season has officially kicked off! Last week, the infamous Friday Night Lights have hit your local high school.

Last Saturday morning, college football launched their 2018 season for most schools across the country. Last Friday, my favorite college team the Colorado State Rams played their second game which was the famous in-state rivalry game against the Colorado Buffaloes.

However, as excited as I am that football season has finally made its way back around on the calendar, I am not optimistic about how my Saturdays this fall will go as a Ram fan. Let’s face it, nobody, even the local Fort Collins sports commentators had high hopes for the Rammies having a successful season and finding themselves in a bowl game. As everyone seems to think, the Rammies lost their stellar offense to graduation which was the only thing that kept them in the running last year.

I wanted to believe that maybe everyone was not giving the Rams enough credit for their potential this year. However, after watching them play in their first two games I have given up all hope that they will have a winning team this fall.

During their first game, the Rams did come back and make some good plays offensively but still lost. During their most recent game, when it really counted against their biggest in-state rival team, both the Ram offense and defense struggled against the neighbor school to their south. The final score was 45-13 which definitely gave CU Buff fans some serious bragging rights.

And I feel like it will not get any better for the 0-2 Rams next week as they take on the Arkansas Razorbacks who looked pretty good during their first game last week. As for the Buffs, they should have good momentum as they travel to Nebraska next week for yet another rival game. Nebraska is never an easy team to beat especially when the game is played in Lincoln and since the outlook for my Rams is shady this year and CU looks like the only Colorado college football team that has a chance at a bowl game in 2018. 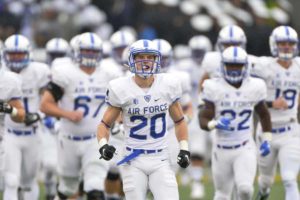 Despite much doubt coming from local football experts, the Air Force Falcons came out swinging during their first home game.

Many were skeptical about how well their team would be this year but they proved to be good enough to win their first game.

The Falcons have started their year confused about who would play quarterback. Arion Worthman started the game and quickly put 24 unanswered points up on the board. Then in the third quarter, the Falcons put in junior backup quarterback Isaiah Sanders to give him some game time. Sanders had the chance to gain some on the field experience before they switched QB’s again and put in Donald Hammond III to finish the game. Hammond was able to shine and score a touchdown on his birthday.

The Falcons’ first home game was delayed two different times during the game for 40 minutes apiece due to lightning. That just meant that the Stony Brook Seawolves basically had two halftimes to regroup and try to formulate a plan. But, they still failed to prevail as they were shut out by the Falcons last Saturday by a score of 38 to zip.

Hopefully, the Falcons can keep their momentum up for next week as they hit road and head to Boca Raton, FL.

The Falcons have yet to have a team score on them as they take on the 0-1 Florida Atlantic Owls during an away game this Saturday at noon mountain time. Since CSU looks so horrible this year the Falcons definitely have a better chance at winning the Mountain West title.