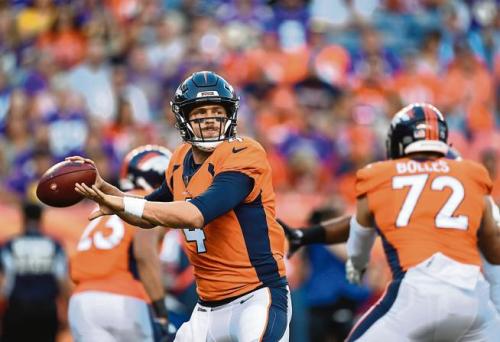 ~ By Bob Volpe ~
It has been a long off-season, but the Broncos are back.
Last Saturday night, the Broncos faced off against the Minnesota
Vikings in the first pre-season game of 2018, losing 42-28 and falling
short of expectations.
There has never been a set up for an ultimate grudge match like this
one. The pre-season couldn’t have kicked off with a better game.
The drama of this game was like something out of a made for TV
football soap opera. The drama began last seasons when fan favorite,
quarterback Kyle Sloter, was stiffed by the Broncos and picked up by
the Vikings. Add to that the canning of last year’s starting
quarterback, Trevor Siemian, who was also picked up by the Vikings.
Then there was the saga of Kirk Cousins, the most sought after free
agent quarterback since Peyton Manning. Cousins was courted by both
the Vikings and the Broncos, as well as a host of NFL teams.
Ultimately, the Vikings won the Cousins lottery, signing him to a
three-year, $84 million deal and ironically, the Broncos wound up
signing last year’s  Vikings starting quarterback Case Keenum. Crazy
stuff!

The first showdown of the night between Keenum and Cousins was all
Cousins. Keenum’s first drive 3 and out. Cousins’ first possession, an
8-play 75 yard drive and touchdown pass to Stefon Diggs. Cousins
victimized rookie defensive back Isaac Yiadom repeatedly, giving the
rookie a taste of what life in the NFL is all about. Match up goes to
Cousins.
Keenum’s second drive was another 3 and out. Trevor Siemian relieved
Cousins after just one drive and showed why he beat out Paxton Lynch
for the starting job last year with Denver. Siemian finished his stint
on field throwing 2 touchdowns, and completing 11-17 passes for 165
yards.
Paxton Lynch was classic Paxton Lynch. Lynch hasn’t progressed a bit
in his third year. He missed opportunities to connect with open
receivers twice because he can’t seem to keep his head up and survey
the field when flushed out of the pocket. Lynch finished with an
anemic 24 yards passing on 11 attempts, and threw one interception on
an ill-advised pass into double coverage. Match up goes to Siemian.
The best battle of the night was the shoot out between Kyle Sloter and
Chad Kelly. Sloter replaced Siemian half way through the third quarter
and drove the Vikes to the Denver 39, culminating is a field goal.
Sloter played the remainder of the game chalking up 69 yards passing
and 1 touchdown.
Enter Mr. Irrelevant, Chad Kelly, AKA “Swag.” Kelly was pumped and
inspired a near comeback. Down 24-14 Kelly engineered a 5 play
touchdown drive, hitting a wide open Matt LaCosse for the score,
narrowing the Vikings lead to six points. On his next drive Kelly
scored again, giving the Broncos their only lead of the game.
Unfortunately, it wasn’t enough to hold back the Vikings, who answered
with a Sloter run for a touchdown that  put the game out of reach.
Kelly finished 14/21, for 177 yards, 2 touchdowns, and 1 interception.
Despite the loss, the Sloter/Kelly match up goes to Kelly.

The Bronco defense failed to stop the run, giving up 147 yards on the
ground, including back-to-back 21 yard runs by Latavius Murray.
Granted top run stuffers Von Miller and Todd Davis didn’t play at all.
The Bronco secondary is missing Aquib Talib. Going into training camp
the Bronco secondary was the biggest question mark sans Talib. All
three Viking quarterbacks burned the secondary at will ending the game
with 276 yards passing.
All through training camp, the Broncos went deep in the passing game
with great success, but failed to throw the bomb at all against the
Vikes. The Broncos also failed to give attention to rising star
Courtland Sutton. Sutton was targeted only twice. He was overthrown by
Keenum once and caught one Keenum pass for 3 yards. Where are the
coaches?
The running back competition is heating up and soon Royce Freeman will
supplant Devontae Booker for the starting job. Freeman rushed for 38
yards on 4 carries, including a 23 yard touchdown sprint. Booker? Meh,
2 carries for 7 yards. Fan favorite rookie Phillip Lindsey showed his
speed, good hands, and quickness. Lindsey’s highlight was 19-yard
touchdown reception from Kelly.
Case Keenum needs more time and freedom to do what he does best,
scramble, and hit wide receivers in stride for long gains. Again,

WHERE ARE THE COACHES?

Special teams made a quantum leap over last year’s squad. The addition
of Marquette King at punter paid dividends. Also, Isaiah McKenzie (AKA
“Butterfingers McFumble”) redeemed himself with a 78 yard touchdown
punt return.
The vaulted Bronco defense struggled mightily against the Vikes. Even
with only two starters on the Viking offensive line, the Vikes
manhandled Denver’s defensive line.
The team in general needs to watch more film on their opponents and
better game plan. Head Coach Vance Joseph is in the hot seat and
Saturday’s performance was less than stellar by the entire coaching
staff. A few more like this and Joseph will be selling cars for John
Elway.