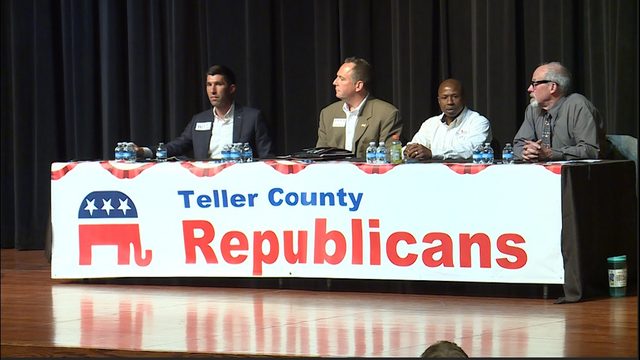 Kudos to the Teller County Republicans and the Woodland Park High School speech and debate team for sponsoring the first ever congressional debate held in Teller County last week.

The forum, held at the WP High School auditorium, was a smash hit, with a flurry of questions for two-plus hours.

Best Coward: Incumbent Congressman Doug Lamborn. Once again, the incumbent congressman’s absence at this debate raised more questions than answers.  His absence, partially a political strategy move according to insiders, may be prompting an array of candidates who want to challenge Doug. This also prompted two of the candidates, Darryl Glenn and Owen Hill, to call for his firing or dismissal as a member of Congress. Bad move Doug.

Best Person for anti-Trumpers.   Bill Rhea. If you aren’t crazy about Donald Trump and want to participate in the GOP primary, Bill Rhea is your man. Rhea may not receive any big applause at GOP Party rallies, and probably won’t fare that well in the upcoming June 26 primary, but his criticism of the division established by Trump could become a selling point for Independents and even moderate Republicans.

He wasn’t afraid to deliver an attack against Trump’s America First punch line, referring to our president as the Great Divider. Also, he deserves an award as the most unique congressional candidate in run in years. Rhea spent considerable time in Cambodia, adopted several Cambodian children and earlier suffered a terrible tragedy involving the murder of his son; an incident that occurred after his son took in a homeless person.

Best Candidate for Local Grass-Roots Connections: Tyler Stevens. Tyler hit a strong stride with his push for fiscal conservatism with a free market, creative approach, and his familiar anecdotes about the fiscal struggles for a town like Green Mountain Falls. His reference to the success of GMF’s involvement with the Pikes Peak Rural Transportation Authority was effective and demonstrated one practical solution for the financial struggles facing small communities. His background as a firefighter, small business owner, and local trustee member also gained many applauses.

With Tyler’s description of the success of PPRTA, one conclusion is certain:  Woodland Park really dropped the ball in not getting involved with this program.

Best Candidate To Serve as Head Football Coach:  Darryl Glenn. No question about this one.  Darryl, as he did in the Teller Republican Big Tent Event last summer wasn’t shy with his football metaphors and continual talk about the GOP’s failure to win the Super Bowl.  Maybe John Elway could have used this motivational talk, when he tried to challenge the Broadmoor links in attempting to qualify for the Senior Open last week. Glenn also definitely showcased his public speaking skills compared to the other congressional challengers. I would have to say he is the superior speaker among the congressional candidates. You can see why he is a prized speaker at GOP rallies.

Best Relayer of State Challenges: Senator Owen Hill. If you want to know about the latest disaster to hit the state government, from CDOT inadequacies to education woes, to fiscal problems, Hill is your prime resource. As a veteran of state politics, he has his share of horror stories and bad choices taken by state and national leaders.

Best Question Which Candidates Stumbled Over. A question by Izabelle Sands regarding LGBT (lesbian, gay, bisexual, transgender) rights appeared to take several contenders by surprise. Several candidates completely choked on that question, and came up with answers that avoided the topic altogether, such as touting certain GOP talking points like freedom and liberty. Stevens and Rhea, who admitted they have dealt with gay and lesbian folks in their family and working lives, were the exception and addressed this issue head on.

Best Unanswered Question: Term Limits. Teller County Commissioner candidate Carl Andersen asked about term limits, and once again, this topic just doesn’t appear to have a clear direction in the U.S. Congress. Every time it is discussed, it gets more complex about instituting limits. What’s the deal? Obviously, more congressional folks need to spend time in Teller County, as we love term limits.

Best Issue That Most Candidates Agree On: More Gun Control Over My Dead Body.  School violence was a hot topic as expected, and nearly all of the candidates appeared on the same page, except for maybe Rhea. The NRA doesn’t have to worry about doing any lobbying in our neck of the woods, as the candidates nearly unanimously agreed that guns aren’t the problem with school violence situations, and touted the need for more security and attention to mental health. They all heavily touted their defense of the Second Amendment and standing up for the rights of gun owners except for Rhea. He maintained that the Second Amendment is not under attack and that some limits may be necessary.

Best Ridiculous Idea:  Disbanding the Department of Education. Sorry there, GOP Congressional candidates; this concept just doesn’t seem like it is going to go anywhere. Forget it. But one related question the GOP candidates need to analyze more deals with the rising cost of education and how to address this crisis. Rhea’s jokingly referral to Bernie Sanders’ approach, in advocating free college education as one that may need more examination, took everyone for a loop. Heads were turning on this one. Education was one gap in the forum that didn’t really get filled, despite several questions.

Best Push for Unaffiliated Voters : Erik Stone, chairman of the Teller County Republicans. It’s good to witness our Republican leaders making an appeal to the many unaffiliated voters to get off their (you know what) and become a part of the primary process.

Several years ago, a few local GOP leaders welcomed this change with skepticism. But now that the voters have spoken, it’s great to see GOP leaders rallying to get unaffiliated folks to partake in the primary.

Best Punches:  The obvious jabs made against Doug Lamborn by Glenn and Hill. It is clear as head football coach, Glenn would have Doug benched and probably sent back to a local farm team. But since Doug wasn’t here to defend himself, these punches went unanswered.

Best Winner:  The high school debate team, and a format that dealt with issues rather than personalities. Also, everyone needs to wish Isabelle Sands, an incoming senior, the best of luck as she enters a national debate competition in Florida.