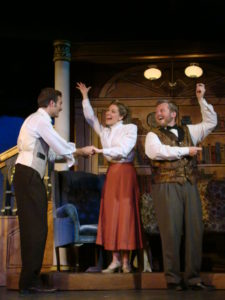 The Butte Theater was opened in Cripple Creek to help preserve a vital part of the town’s history.

Back in the area’s gold boom days, melodramas were a very popular form of entertainment. People would go to the opera house to get entertained by a popular style of live plays, flourishing in the 1890s, which encouraged audience involvement. This theatrical genre was later rekindled by the Mackin family at the old Imperial Hotel. The Mackins played a key role in putting Cripple Creek on the tourism map for years, and this year marks the 70th anniversary of classic melodrama in Cripple Creek

These days the city operates the Butte Theater and offers a number of live performances throughout the year. For the last decade, the Thin Air Theatre Company produced the shows but their contract ended last year. This year the city has signed a new contract with the Mountain Repertoire Theatre Company (MRT).

“We will miss the Thin Air Theatre Company, but we are happy with what the Mountain Repertoire Theatre has done so far,” said Butte Manager Mel Moser, a mainstay of theatrical productions in Cripple Creek for decades. According to Moser, the new production company has taken steps to add more value and help grow the shows. The new company is bringing on board new talent and a different way of producing live performances.

Moser said that the new company has found a way to incorporate more musical theater into the lineup while maintaining the classic melodrama theme. He said that even though the company is new, they have been a part of Butte Theater productions in the past and have produced melodrama shows in other parts of Colorado.

The new company has proven their success by adding more musical and dance numbers to the performances. In an effort to keep the classic, historic theme, the production company uses dance styles and musical compilations from the olden days.

Moser also appeared very excited about the effort the new company is now putting into their pre-show performances. Before the main show starts, there will be a number of musical and dancing performances to get the audience prepared for the show. Moser believes that having better pre-shows will be a good change because they get the audience in the right mood to enjoy the performance.

“I think the crowds will be pleasantly surprised with the changes we have made and the wonderful talent we now have aboard,” Moser said. 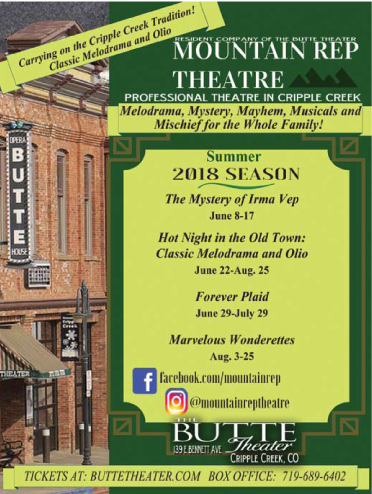 To kick off the 2018 season, the Butte Theater offers a spoof of the Gothic melodrama called “The Mystery Of Irma Vep” that will run from June 8 to June 17. This first show fits the classic melodrama theme and incorporates characters such as a vampire, an Egyptian princess, and a kind werewolf.

Running from June 22 to August 25 is a show entitled, “Hot Night In The Old Town.” This classic melodrama and olio brings in the exciting history of Cripple Creek’s wild west days of the past.

From June 29 to July 29, the musical “Forever Plaid” hits the theater stage. This musical is based on the story of four young singers dying in a car crash and includes classic barbershop quartet harmonies and pitch-perfect melodies.

Starting on August 3 and ending on Aug. 25,, the Butte Theater will offer “The Marvelous Wondrettes.”

During this show, the audience travels to a 1958 high school prom and showcases four girls in crinoline skirts singing and dancing to classic hits from the 1950’s.

Towards the end of the summer season, the Butte Theater will put on “Always… Patsy Cline from August 31 to September 30. This musical is based on the true story of the life of famous singer Patsy Cline.

During the fall season, the production company is bringing the Rocky Horror Picture show to town. For the winter time, the Butte Theater will offer “Mountain Holiday: A Christmas Melodrama and Olio.”