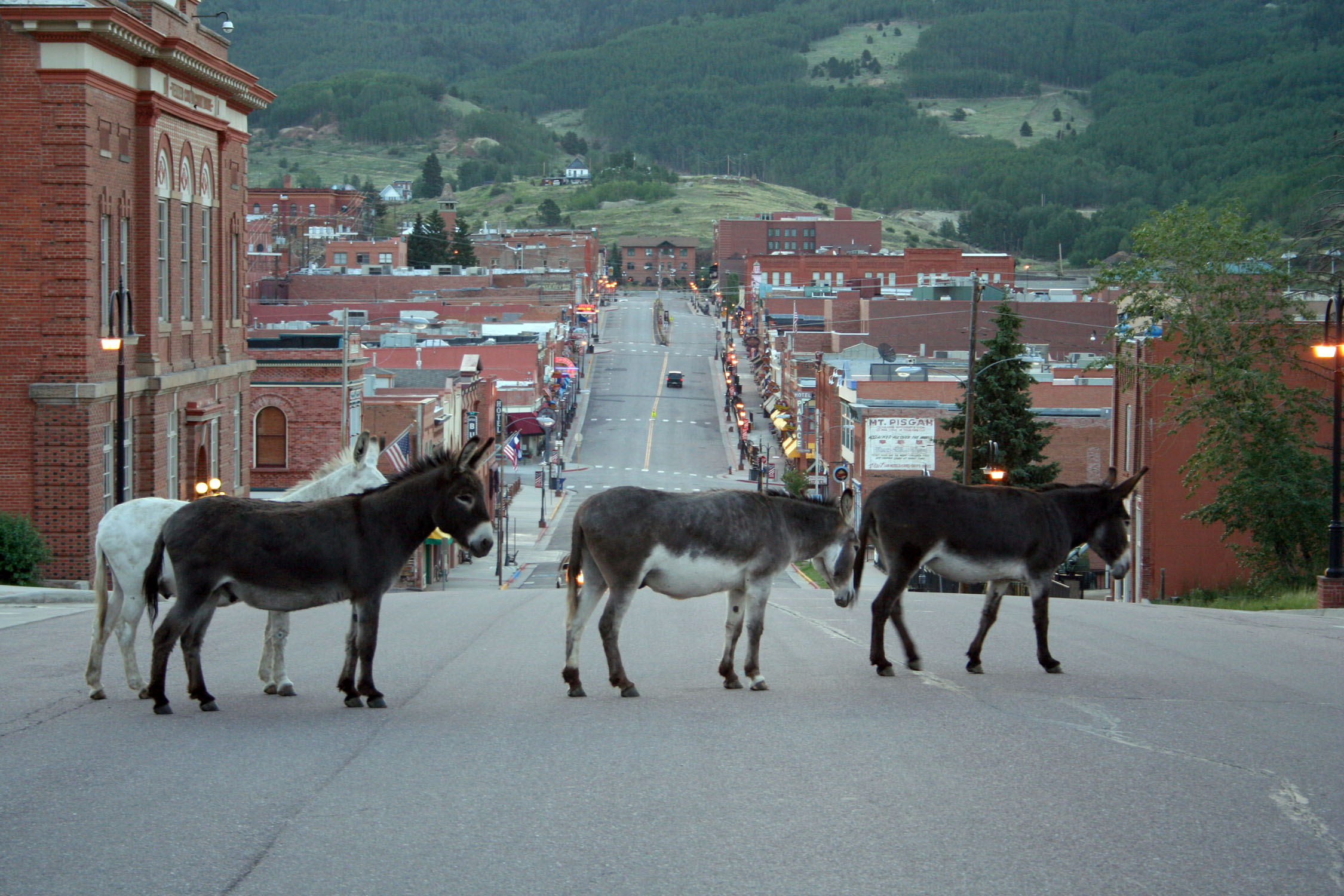 Pending any surprises by Mother Nature, Cripple Creek’s favorite attraction and personality is slated to start roaming the downtown and residential streets, starting this week.

So guard your trash and gardens and get those carrots ready, not to mention your best burro-related stories (true or false) for Creek visitors.

In a recent council meeting, Richard Tremayne, the vice-president of the Two Mile Club, the group that cares for the town’s world-famous donkey herd, stated that the asses will be coming to town this week. And he didn’t hesitate to emphasize the legacy behind the herd and the club. “They (the town’s donkeys) are our biggest attraction,” said Tremayne. “They are Cripple Creek’s ambassadors.”

Tremayne also gave a little folklore of the donkey herd that may be part legend or fact, coupled with Cripple Creek’s love for historic tales.

According to legend, the donkeys are direct descendants of the pack animals used to haul material out of the mines in the late 1890s.  But President Teddy Roosevelt, who visited the area often, reportedly objected to using the donkeys for mine work in the Cripple Creek/Victor district. As a result, this practice was halted, but the donkeys have still played a vital role in the town’s heritage. They are consistently voted as the best local attraction, based on Best Of The High Country reader surveys sponsored by TMJ.

In fact, the donkeys have been an important player in the town’s bid for tourism, with the former races between Victor and Cripple Creek serving as a contest that gained national attention. An entire signature town festival has been held in their honor for decades. The biggest attraction, though, may have been the sight of pseudo-donkey race competitors, who tried to tame the animals and ended up in ditches, and sometimes never returned. Those were the good old days.

But in the post-gaming era, the donkey herd has been extremely popular for visitors, gamblers and for special events.

The herd now encompasses 16 donkeys, courtesy of a few adoptions. Tremayne said the club is doing a lot of activities to enhance the appreciation of the donkeys with special viewing areas at the Jail Museum and Cripple Creek District Museum.

He also said that the club does a scholarship program and plays a big role in organizing events for Donkey Derby Days. In addition, efforts have been launched to have more interaction between the public and the donkeys at their winter home near the public works facility. “We want to revise the winter pasture and have a better public interface,” said Tremayne.

Contrary to some erroneous perceptions, donkeys have fairly good longevity, often living to at least 40 years of age. But over-eating is a big problem, putting more of an emphasis on education and special care during the winter months. Tremayne admitted that the club actually has to do more work during the winter when the donkeys are housed in a special pasture outside of the downtown area.

The club vice-president also made a push for more volunteers. “We are healthy but we are looking for volunteers,” said Tremayne, when describing the club.

The Two Mile High Club has been in existence since 1931. Besides caring for the donkeys and sponsoring Donkey Derby Days, the group plays a big role in organizing the Aspen Jeep Tours in September. Club members run the tours, at their own expense, and often provide the stories (behind the historic sights and ride attractions). Many of their activities were orchestrated to extend the town’s tourist season and garner more publicity for Cripple Creek.

The council reacted positively to the news of the return of the donkeys to town. They certainly didn’t argue with the fact that the donkeys have become a prime attraction, and lauded Tremayne and the club for their work

Councilwoman Melissa Trenary, a veteran leader of the Two Mile High Club, cautioned that business owners and casino employees need to urge visitors not to feed the donkeys people food, and to stick with such items as carrots and apples. “The donkeys get too fat during the summer,” admitted Tremayne. Both he and Trenary cited the importance of keeping the donkeys as healthy as possible.