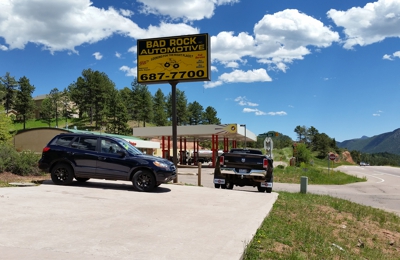 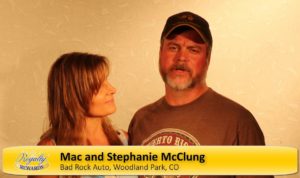 When Mac McClung, owner of Bad Rock Automotive on the far eastern end of Woodland Park city limits, built his business, he had no idea about the can of worms he may open.


At issue is a major fight over infrastructure improvements and fees expected of local business owners.


McClung decided at that time to install the sidewalks, curb, and gutter to enhance the look of his property. He was then told by the city that installing those improvements would change the drainage on the property, and he would then be required to install a culvert as well as the sidewalk improvements, and landscape enhancements.


Plus, the land along Hwy. 24 is CDOT (Colorado Department of Transportation) property and he would have to conform to their requirements. He then decided to submit the $13,000 to the city “in lieu of fees,” as the city required.


Mc Clung then stated, “The ink wasn’t even dry on the check when the city said, ‘Oh we don’t like all the weeds in the ditch. We want you to dig all that up and riprap all that.’” According to McClung, this new requirement wasn’t revealed to him until after he had paid the “fee in lieu of” payment, which led McClung to believe the city wasn’t really interested in having the sidewalk, curb, and gutter, but was only interested in getting the money since the nearest existing sidewalk to the east is Manitou Springs, and the closest sidewalk to the west is Wal-Mart, seven-tenths of a mile away. 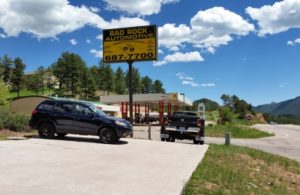 The “fee in lieu of” money the city can impose on businesses and developers that do not comply with sidewalk, curb, and gutter regulations and other required improvements for projects. Often, these requirements can’t be met by the applicants due to certain physical and topographical limitations.


McClung also discovered that when he had additional property vacated at the rear of his business for a parking lot, the city wanted an additional $5,000 payment “in lieu of” for sidewalk, curb, and gutter on that part of his property.


McClung was still considering having the sidewalk, curb, and gutter installed, so he contacted a contractor for a bid. According to the business owner, when he submitted the bid to the city, he was told the bid was way too high. The city then suggested he file for another extension, at his expense, to give him time to get more bids. An extension was then granted by city council.


When it all came to a head for McClung was when, according to his assessment, “It didn’t become an issue until the head of the planning department, Sally Riley, came to my waiting room trying to coerce me into complying to the point where she threatened a cease and desist order.”


Riley was asked if this accusation was true.  She replied that the city attorney advised her not to discuss pending litigation.


McClung believed then that the city was engaged in “extortion,” and he contacted attorney Steven A. Klenda of the Denver law firm Klenda Gessler and Blue. He said, “When I was threatened with a cease and desist order, it pissed me off so I started looking. Came to find out not only is there extortion, but it is technically illegal according to our Constitution. When I showed that to Sally Riley and
then City Manager David Buttery, I expressed to Buttery that I had been lied to, I’d been coerced, and I’d been threatened, and I’m done.”

McClung then decided to sue the city in federal court. .

McClung bases his suit on the 5th Amendment “takings” clause. In the case of Nollan and Dolan, the court decided that a “taking” of private property occurs when a government “requires a developer to provide specific land, improvements, payments, or other benefits to the public to help offset the project’s impact.”


In a statement to TMJ News, McClung’s attorney Steven Klenda said, “Governments often extort private property owners who want to improve their property by forcing them to pay fees or build unnecessary improvements to obtain a zoning or land-use permit. Most of the time, they get away with it because it is cheaper to comply than fight.


“A condition that government imposes on granting a land-use permit is an ‘unconstitutional exaction’ if the condition is not linked to a legitimate government purpose and roughly proportional to the impact of the proposed land use, based on an individualized analysis. Forcing BadRock to build a sidewalk without purpose that was proposed without analysis is disproportionate to any impact of Bad Rock’s
parking lot.”


The city contends the regulation in question conforms to state law. Fees in lieu of arrangements are fairly common for many development projects.


McClung attempted to settle the issue before “all the lawyers get involved” by penning a letter to each council person to try and come to an amicable solution. He stated that City Attorney Erin Smith directed council not to discuss the issue with him. He appeared before council at last week’s regular meeting to seek a response from council, but was once again told that council could not discuss any pending litigation.