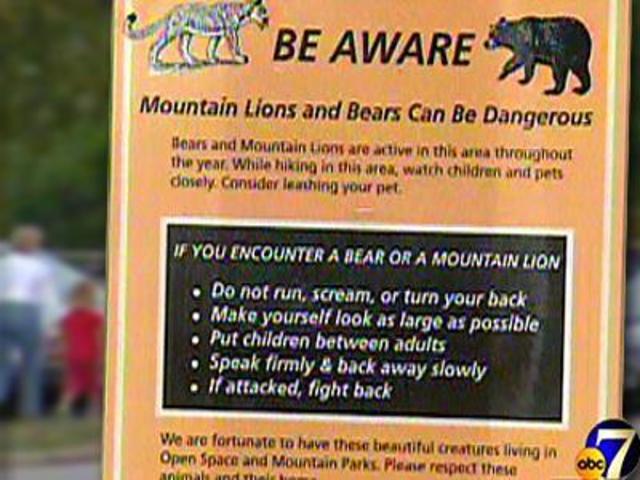 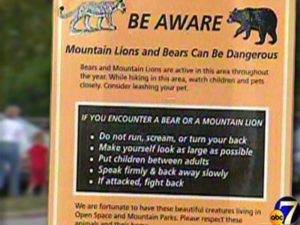 Recently it has been announced all over local news sources that wildlife activity in Southern Colorado is on the rise.

Local wildlife officials have announced that the amount of deer per square mile in the Ute Pass region has increased. Last month the Colorado Parks and Wildlife division put out a press release warning the public that mountain lion sightings in Teller County are on the rise.

So for May, the new wildlife warnings that are hitting the region have to do with bears. During the winter bear activity slows down because most bears hibernate in their dens in the mountains when the weather is cold. During springtime, bears come out of hibernation and are on the search for food.

Bears are omnivores meaning they eat both meat and plants. However, a typical bear’s diet consists of 90 percent plant matter. Every once in awhile they eat meat in the form of a newborn deer or other small animals when it is convenient. 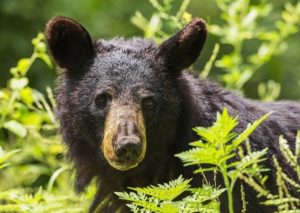 According to Tim Kroening, the District Wildlife Manager for the Colorado Parks and wildlife division, there are 17,000 to 20,000 black bears.

Even though the name suggests that the bears are all black in color, according to Kroening this is not always the case. “Their fur can be black, blonde, cinnamon, chocolate, brown or even with a mix of colors,” Kroening said. “I have even seen one in Teller County that was dark brown with a blonde Mohawk down its back.”

Most of the bears in Colorado live west of Interstate 25 but more and more bears are being noticed in the cities. According to Kroening, more bears search the cities for food due to the increasing human population and the convenience factor. “They are kind of like me. I’m more likely to get junk food at a drive-thru place rather than spend time building a nice, healthy salad,” Kroening stated. “If they can dump a few trash cans, push open a door and crash a kitchen or toss a campsite and find a cooler full of food, they will do it over and over.”

Recently there have been many incidents where a bear or family of bears choose to stay in the city instead of going back to their natural habitat.

There was one recent situation where a mother bear and two of her cubs were roaming the west side of Colorado Springs and causing problems. A team of wildlife officers decided to relocate the bear family instead of euthanizing them. The officers brought the bears out to a location hundreds of miles west in a mountainous region. Days later the mama bear and her two cubs were seen back in city neighborhoods.

The Ute Pass region is also not new to dealing with bear encounters. A few years back a house in Green Mountain Falls had a rather frightening encounter with a bear.

A man woke up in the middle of the night when he heard a noise. The man then noticed a bear had broken into his house and was walking upstairs towards a child’s bedroom. The man opened fire at the bear killing the intruder.

Kroening says that the worst part of his job is having to euthanize bears. “I’ll likely be the one with the sad duty of putting the beautiful creature down,” Kroening said. “Help me avoid that part of my job that no Wildlife Officer takes pleasure in.”