~ by Rick Langenberg ~
An election touted as one of the ugliest showdowns and more contested in Woodland Park’s history continues to get more bizarre every day.
In the fight for the third and final council seat, a tie has been declared between current council members Noel Sawyer and John Schafer. This is the first time in recent memory an elected seat in Woodland Park has resulted in a dead heat. Both candidates ended up with 997 tallies. On the eve of April 3, Schafer had a slight advantage, but only by two votes. A number of ballots still had to be tabulated, including overseas tallies. Officials had initially determined this seat too close to call.
“What are the chances of this happening in Woodland Park (with an exact tie),” questioned many local political observers. But this is apparently par for the course for election 2018 in WP, which included plenty of verbal blows and bizarre developments. 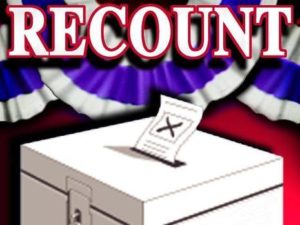 A recount was scheduled on Monday afternoon, as TMJ News went to press.
If a tie remains as expected, the seat would be determined by a chance drawing, such as pulling names out of a hat, selecting cards or flipping a coin. If such an event occurs, it will occur this week, according to city leaders.
Tie verdicts aren’t uncommon for smaller municipalities in Teller County, such as Cripple Creek and Victor. But they are extremely rare for Woodland Park, and basically, unheard of.
In last November’s municipal election in Cripple Creek, a card draw was held to determine a Ward 5 council position between contenders Melissa Trenary and Jeff Register. Trenary gained the council seat by selecting a 10 of diamonds, while Register drew a 7 of the clubs. “It is so Cripple Creek,” quipped Trenary, regarding the use of a chance drawing to determine the council seat in Cripple Creek.
Besides Trenary, many locals joked about this occurrence but attributed this to the folksy style of Cripple Creek politics. A previous chance card selection was used to determine a previous Creek election 15 years ago between Ed Libby and Noel Perran for a council seat. Libby gained the upper hand on that vote and then went on to become the mayor of Cripple Creek and spearhead the main effort to construct a Heritage Center.
But in Woodland Park, this could be a record-setting development. For critics of this process, good luck making a legal argument.
Colorado laws stipulate that tie elections are to be determined by a “drawing by lot,” a fancy bureaucratic term for a final vote to be decided by a card game, coin toss or pulling a name out of a hat. State election guidelines have provided Colorado municipalities with no other options, such as doing a council appointment or having another vote.
Typically, these chance drawings or the format used has to be agreed on by both candidates, and the selection is monitored by a canvass board.
Regardless, the stakes are high in this selection, as both candidates have vastly different opinions on the operations of the city. Schafer is a big critic of many fiscal policies of the city, while Sawyer often sides with the mayor and the administration on a number of issues.
This outcome could further determine the political direction of the city, as both contenders for the final seat aren’t short on commentary at council meetings.
The final election results didn’t alter any other seats. Levy won the mayor’s seat with a 1,187 to 1,008 verdict over Councilman Val Carr. The top two council winners, Kellie Case and Hilary LaBarre, received 1,205 and 1,059 tallies respectively.
As for other challengers, George Jones received 886 tallies, while Mark Maruszak got 986.
By the end of business on April 11, the final ballots were tallied and voter signatures discrepancies were resolved. More than 2,200 ballots were cast in the April 3 election.