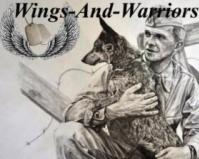 ~ by Trevor Phipps ~
Four years ago, local business owner and cosmetologist Deb Davidson received a phone call from her son who was in the military at the time.
Her son told her that he was upset because his chaplain had recently committed suicide. As a result of this tragedy, her son did not have anyone he could talk to about many critical and touchy subjects, and obtain needed comfort. Davidson felt badly for her son. Moreover, she realized that her son’s plight was a situation that most likely other enlisted military personnel and veterans struggled. And then there was the difficulty of adjusting to life after the military, and dealing with many physical and psychological injuries.
Due to her love of people in the military, Deb Davidson decided that she wanted to do something to give back to the veteran community She then realized the one thing that had helped her get through rough times in the past was her dog. What if, Davidson thought, she could train dogs to help veterans and former soldiers like her son?
She then started a non-profit organization called Wings and Warriors to provide a solution for veterans that struggled with medical problems. The organization has now grown to three locations and has trained almost 20 dogs to assist veterans. The organization finds a veteran in need, then goes out and matches the perfect dog for them. Davidson’s team of volunteers works with the dog and the owner, and trains them both. 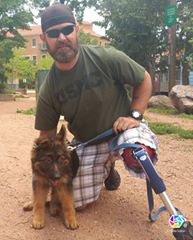 The group of volunteer dog trainers works to teach the animals to do a number of activities that provide assistance to vets. “Anything we think we can train a dog to do something that will help a person, we do it,” Davidson said. The ways dogs help veterans include providing stabilization for amputees and anxiety relief for veterans that suffer from Post-traumatic Stress Disorder and Traumatic Brain Injuries.
According to Davidson, her team can teach the dogs to comfort them when they see an anxiety attack coming. The dogs are trained to get in between their owner and other people when they are in crowds to help decrease the veteran’s crowd anxiety. The dogs sometimes also get taught to bring their owners medicine or open refrigerator doors, and fetch bottles of water.
Other dogs are trained to comfort their owners before they notice a seizure is coming. According to Davidson, they train the dogs to provide both physical and emotional support. Some dogs are trained to give people confidence and relax them in different life situations.
Currently, the organization has one of their trained dogs, Shiloh, entered in the election for the Mayor Of Divide. Shiloh has helped comfort many different veterans who have needed help from the organization.
The next fundraiser for the group is a Spaghetti Dinner that is planned for September 22. “After we planned the date we realized September 22 was the perfect date for two reasons. The statistics show that 22 veterans a day commit suicide in the U.S. And the month of September is National Suicide Awareness Month,” Davidson stated.
Wings and Warriors founder Deb Davidson plans to continue her work with dogs and veterans in to the future. “Wings and Warriors is a passion for me and not a job,” Davidson said.