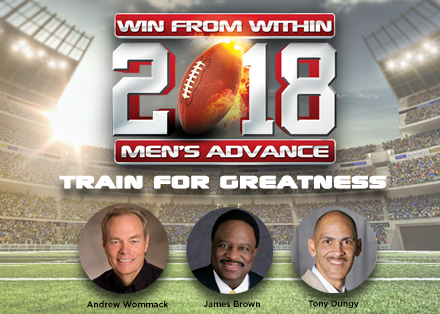 ~ byTrevor Phipps ~
Every year for at least the last decade, the Charis Bible College and Andrew Wommack Ministries has put on a special event just for men.
The event, entitled “Men’s Advance,” is designed to educate and inspire Christian men. Even before the bible college made Woodland Park their home, the ministries held this three day conference that consists of inspiring speeches from founder and president Andrew Wommack and a number of other well-known guest speakers.
This trend has continued with renewed fervor, capped by celebrity speakers, with the ministries’ headquarters in Woodland Park. The event is held in the main auditorium of the Charis Bible College that seats over 1,000 people, and an overflow area is set up downstairs for spectators that can’t fit in the auditorium to view the presentations live-streamed on a giant projection screen. The events were live streamed online where women and others could watch from their homes.
Last year the conference changed its pace and invited popular NFL announcer James Brown to come speak. This year the conference added former NFL coach and current NFL announcer Tony Dungy to its lineup of guest speakers.

In previous years the conference was almost always held in the cold month of January. This year the bible college decided to host the event in March, providing warmer weather for the spectators, some that travel from other states. The conference started Thursday night, and then featured a morning and evening session on Friday and ended the conference with a Saturday morning session.

The event is open to men of any age. The three-day conference costs only $55 and includes four meals over the three–day period. The conference included speeches from Andrew Wommack, James Brown, Tony Dungy and other Charis ministers. In between the day and night session on Thursday, spectators of the conference had a choice to be a part of a number of different activities. The activities offered by the college, included a movie, ATV expeditions, Charis Bible College construction tour, and even sumo wrestling.
This year with the addition of Tony Dungy added to the event roster, the college was able to sell over 1,200 tickets. Spectators came from all over Colorado and people were there that represented states like Oklahoma, Florida, and Texas. According to Charis officials, most of the 1,200-plus attendees stayed in Colorado Springs and various locations in the region during the conference due to the limited lodging options in the area.
The theme for the 2018 Men’s Advance was “Win from within.” Both Brown and Dungy focused on ways they have used their faith to “win from within” in their personal lives. Dungy was a relaxed, calm and direct speaker that told stories of events that happened in his life that relate to the subject. Brown had a more excited and energetic delivery and used several verses from the bible to get his points across.
To start his speech, Dungy said that after being an NFL coach he was used to giving short and sweet three to 10 minute speeches and was not used to speaking for the fifty minutes he was given this time. He used many stories of his personal life including his years as a player with the Pittsburgh Steelers, as a coach with the Tampa Bay Buccaneers and Indianapolis Colts, and as a sports announcer and motivational speaker. He even told a story of the personal struggles he saw former NFL Quarterback Michael Vick go through as a mentor.
Brown on the other hand told the crowd that it would be harder for him to stop talking after an hour of having the floor. He talked about how he and Coach Dungy have kept their faith through the years by having phone call bible studies every Wednesday despite their busy career schedules. He also emphasized the importance of focusing on the future and letting go of the past in order to “win from within.”
Overall, the two celebrities used a combination of their personal experiences and interpretations of bible verses to educate men on how to “win from within.” When asked how speaking about religion was different from what they did every day as a career, they both said that it was pretty much the same because they use principles of their religion in everything they do in everyday life. The three-day conference also gave Charis the chance to showcase their facility and courses they offer to prospective students.