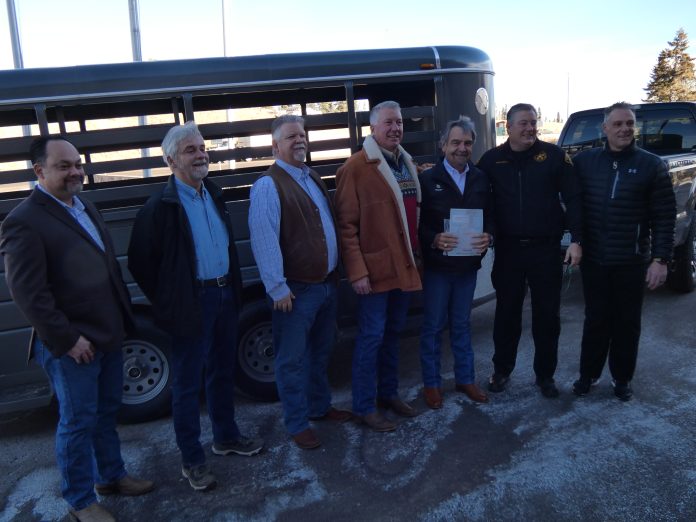 When a natural disaster strikes a community, it takes the efforts of many residents, civic leaders, law volunteers, emergency service workers and law officers to prevent the deaths of people and their pets/livestock.

Although the Ute Pass Region is safe from several types of natural disasters, such as hurricanes and tidal waves, bad occurrences still can take place from time to time.

Last week, another step towards being prepared for disasters was taken by representatives of the Charis Bible College and Andrew Wommack Ministries.

Last Monday, two representatives from the ministry donated a horse trailer to the Teller County Sheriff’s Office.  Law enforcement and county officials were quite thankful of the donation, especially in lieu of what they could expect in forthcoming fire seasons.

The most common type of disaster that strikes the high country is the instance of a devastating wildfire. Even though the area has been safe for the last several years from giant, destructive blazes, wildfires still occur.

And the local emergency management department constantly works on steps of preparation in case a blaze the size of the Hayman fire, which scorched thousands of acres in 2002 and destroyed many homes. Mitigation efforts and making sure first responders are prepared for disaster are top goals in Teller County and for other municipalities in Southern Colorado.

Whenever a fire disaster strikes locally, the community seems to come together to help those who get displaced due to their properties being threatened. For example, during the High Park Fire that struck earlier this year, fire departments from all over the region got on board in the rescue efforts.

In rural areas, one of the biggest challenges with wildfires is to get people evacuated from their properties in time before structures are threatened. Since many people in the Ute Pass region have pets and livestock, evacuating animals can become quite a chore.

In fact, every time a blaze hits the area, many people who have the capability to move large animals offers their services. It often takes people with horses and other large animals several hours to get all of their animal friends safely evacuated from their properties.

During the High Park Fire that took place early last summer, some people had trouble getting all of their animals off their property as the blaze got closer and closer. There were several posts on social media asking anyone with horse trailers to help evacuate animals.

The demand to help people move their animals got so big, in fact, that local organizations had to get involved to help.

After the Teller County Sheriff’s Office expressed concern for getting all animals off the endangered properties safely, the Newmont Mining Company and Andrew Wommack Ministries pitched in to buy a horse trailer for the sheriff’s office to aid them with transporting horses and other large animals.

And according to Teller County Sheriff Jason Mikesell, even though they received a horse trailer earlier this year, their agency was still in need for more in preparation for the next disaster. “When they (Andrew Wommack Ministries) contacted us with an opportunity to receive another horse trailer, we were excited because we needed more than one,” Mikesell said.

“This is a major piece to help us clear animals during different emergency events. And to be able to have that partnership where they called us and said, ‘hey we have another horse trailer, would you like it?’ We couldn’t ask for a better partner.”

When the representatives from the bible college brought the new horse trailer to the sheriff’s office in Divide, all of the county commissioners and the command staff of the sheriff’s office were present to show their thanks for the new useful gift. “Hopefully we won’t have to use it ever again, but we really appreciate it,” Teller County Commission Chairman Dan Williams said.