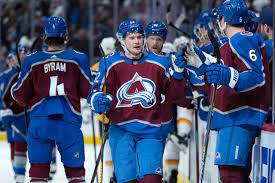 Earlier this year, Colorado sports fans were thrilled when something happened that hasn’t occurred in the state for nearly a decade. The state actually had a professional sports team win a national championship!

The National Hockey League (NHL) playoffs started on May 2 and then they ended on June 26 when the Colorado Avalanche defeated the Tampa Bay Lightning 4-2 in the Stanley Cup Finals. The recent win marked the team’s third Stanley Cup victory in franchise history with the last one being over 20 years ago in 2001.

During the playoffs, Avalanche fans seemed to come out of the woodworks, as it seemed like just about everyone in Colorado was now interested in the professional hockey team. During the playoffs that lasted nearly two months in the late spring and early summer, the Avalanche was definitely the talk of the state.

People were hopeful that with the Avs’ stellar regular season record that they had a good chance to go all the way. And fans everywhere were excited when they closed the deal and took home the trophy for the off-season.

During the team’s time off, every player had a chance to spend some time with the notorious Stanley Cup. The cup also went to several places for showings across the state, including some Colorado Rockies baseball games.

In September when the Avalanche was slated to start their ’22-’23 season, Avalanche fever struck across the state including in the Teller high country. People were excited to watch their favorite team back on the ice on Sept. 25 and the hockey team once again became the talk of the town.

Many fans are hopeful that the Avs can take home the Stanley Cup for the second season in a row. And as Denver Broncos started to disappoint local sports fans, watching hockey seemed to increase in popularity, compared to witnessing Russel Wilson and Nathan Hackett disasters.

And since the team has been so popular this year, pretty much all of the Avalanche games have been showcased as local sports hubs. McGinty’s Wood Oven Pub in Divide, The Creek in Cripple Creek, and the new Thai Good Eats Pool Bar have become popular spots to watch hockey games, just to name a few.

However, even though the team proved to be the best last year, other teams have been hungry for blood to start the season. Some Av fans have been slightly disappointed with their progress so far this season, but it is still very early to tell if they will once again be playoff contenders or not. The team didn’t start that well in 2021, but ended up taking the St. Stanley crown.

At the end of last week, the team had played 18 games and they had a 11-6-1 record. The team is currently in third place in the Central Division behind the Dallas Stars and the Winnipeg Jets. But the Avs regular season schedule does have 82 games in it, so there is plenty of time for them to approve.

So far this season, the team’s right wing Mikko Rantanen has led the team offensively with a total of 28 points scored. Center Nathan MacKinnon sits right behind Rantanen with 27 points scored. Avalanche star Cale Makar has also been good at getting the puck into the net with 21 points scored.

When it comes to guarding the net, goalie Alexander Georgiev has been the team’s starter has he has played 12 games so far. Georgiev has a 9-2 record with 29 goals against 380 saves.

The team’s other goalie Pavel Francouz has also come in clutch during the six games he has played. Francouz has only had 16 goals scored against him and 170 saves. His goals against average currently sits at 2.7 per game.

The Avalanche will be back on the ice this week, with plenty of opportunities to catch them in action. They play the Winnipeg Jets on the road on Tuesday, another road game against the Buffalo Sabres on Thursday, and they challenge the Boston Bruins during an away game on Saturday.