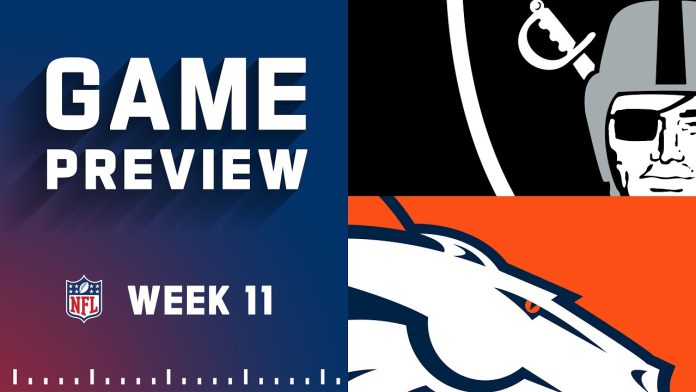 Infamous Rivalry Against the Dark, Evil Empire Returns to Denver

This is Raiders Week.

To some Bronco fans, no matter how the season is going, beating the Raiders is all that matters.

Before I get into the meat of the match-up between the Broncos and Raiders, let me say a little something about NFL football and the pitfalls of prognosticating.

Before the 2022 season started, all the talking heads, odds makers, and fans could talk about was how the AFC West was going to be the toughest division in the NFL. Big name trades by the Broncos, Raiders, Chiefs, and Chargers had everybody saying this division would likely send at least two, maybe three teams to the playoffs. The Chiefs, of course, were going to be the team to beat, or at maybe see a tie with the Chargers or Broncos with a win/loss record of 14-3. Hopes were high. Then the games began.

As of week 9, the Chargers, Broncos, and Raiders have all been mere mortal teams with middle of the road, to terrible records. Who would have thought that the AFC East would be the bad boys on the block (OK the Bills were great last year too.) The Bills, Dolphins, and Jets, have blossomed while the perennial champion Patriots are bottom dwellers in that division. It has been a very strange year in the NFL.

Alright, enough of my rant for the week. On to the Raiders game.

This is a revenge match against a historic enemy of the Broncos.  In their last meeting, the Raiders beat the Broncos 32-23 on their turf. This time they’re in our house with game time set on Nov. 20 for 2:05 p.m.

The Raiders are sitting in the AFC West cellar with a 2-7 record after falling to the Colts last week 25-20. It’s so sad to think one of the two Raider victories was against the Broncos.

Raiders Wide Receiver Hunter Renfro and Tight End Darrin Waller were both put in injured reserve last week and won’t be suiting up this Sunday. Those are two of the Raiders main and best weapons. Both Renfro and Waller are third down specialist and have ripped the Denver defense on many occasions.

They still have Running Back, Josh Jacobs and Wide Receiver, Devante Adams. Jacobs always has a good game against the Broncos. In the last meeting Jacobs rushed for 144-yards, one of them went for 43-yards, and two touchdowns. Adams was held in check most of the day in the week 4 game by Bronco Defensive Back, Patrick Surtain. Even still, Adams caught 9 passes for 101-yards, but no touchdowns.

The Broncos are showing no signs of coming out of their coma on offense. Last week they fell to the Titans 17-10 in a fierce defensive game.

Injuries continue to haunt the Broncos. Last week, K.J. Hamler didn’t play due to a non-contact hamstring pull during practice and Jerry Jeudy went down with an ankle injury during the Titans game. Both Jeudy’s and Hamler’s status for Sunday is doubtful.

The offensive line is also suffering massive injuries. Guard, Graham Glasgow went down after he filled in for Lloyd Cushenberry who is on injured reserve. Rookie Luke Wattenberg finished the Titans’ game with very little effectiveness. Billy Turner, who just returned from injury, went down again last week in the Titans game and Left Tackle, Garett Bowles suffered a broken leg in week 5 against the Colts.

The one bright spot in Bronco Country is still the defense. Last week the D held the Titans freight train running back, Derrick Henry, to only 53-yards on 19-carries. They’ll have to do the same against Jacobs this week if the Broncos are going to pull out a W.

Bottom line: Both teams are banged up, and stinking up the NFL, but I think the Raiders have all but given up on offense. The Bronco offense is reeling with a rag tag group of linemen trying to give Wilson time to throw the ball. They won’t be able to hold back the Raider pass rush. It’s going to be up to the defense to keep the Broncos in this one, but I think we will get our revenge in a game of mostly field goal.

TMJ Pick: Broncos beat the Raiders by a close 16-14 score.