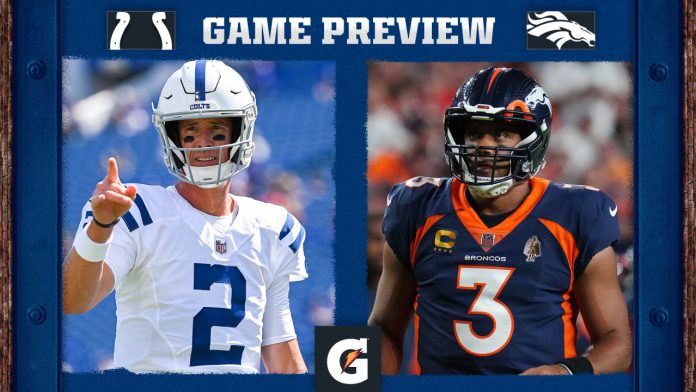 Broncs Versus the Colts on Thursday Night

This week the Indianapolis  Colts come to Denver.

This will be the third time this year that the Broncos will be featured on a national stage. Thursday Night Football has been commandeered by the folks at Amazon and will be shown on their Amazon Prime TV app.

The Colts have been having an up and down season, but mostly it’s been a down season. They tied with the Texans on the first game of the season, got shut out by the Jaguars, and managed the unthinkable by beating the Chiefs, 20-17. The wheels came off for the Chiefs early in that game when Skyy Moore muffed a punt on the Chief’s 7-yard line and the ball was recovered by the Colts. Three plays later, the Colts had 7-points. The Colts come to Denver with a 1-2-1 record.

Last week the Colts played the Tennessee Titans in a game that was almost as boring as the Bronco/Niners game. With two minutes left, a last gasp attempt to tie or win with a two-point conversion, Colt Quarterback, Matt Ryan was sacked for an 8-yard loss. This pushed the ball back to the Titans 25. Rather than give Ryan a chance, the Colt’s Head Coach, Frank Reich went for the 33-yard field goal and missed. Colts lost that one 24-17. Another case of bad coaching.

These Broncos keep making a liar out of me with my game predictions and I’m starting to feel offended. I can’t let this go without saying a little something about last week’s loss to the Raiders. I hate that.

What makes the loss even worse is the injury report that will come out Monday. Looks like Randy Gregory, P.J. Locke, and worst of all Javonte Williams will be sidelined for a while.

Speaking of injuries, Melvin (fumbles) Gordon couldn’t have hurt the team more last week than if he just went down with an injury himself. Gordon has fumbled the ball 4 time in four games, he lost two of them. His fumble against the Raiders went for a Raider touchdown. His fumble on the one against the Seahawks cost us a touchdown. It’s time to cut bait, pay him off, and send him on his way.

Let’s face it, what were seeing this year offensively, is what we’ve seen offensively for many years under many head coaches. The players change, the coaches change, but the playbook remains the same.

Sure, common football strategy is to use the run to set up the pass. At least that’s the common frame of thought. I seem to remember using the pass to set up the run a-la John Elway, Terrell Davis, and Rod Smith.

We were promised a dynamic offense when Coach Hackett came into down with Wilson. I don’t see it.

TMJ Pick: Anyway, back on this week’s game. It’s a tossup folks. Neither team is ready for prime time. I just hope it isn’t as bad as the 49ers game was.

With a new season kicking now into high-gear many fans are returning to the Denver Broncos corner for what key insiders are predicting as their first real chance at the  playoffs since the  Peyton Manning glory day.  The NFL season is a good way to put the mute button on all the national, and yes, local politics, not to mention an invasion of social media ramblings.  Let’s have fun again for the NFL Season.

It’s another prime time game night for the Broncos, as they play on Thursday night (ouch) and host the Indianapolis Colts.

Game time for the Oct. 6 showdown  is 6:15 p.m. Yes, we know, It’s a short week for us fans and for the Broncos.  But what else are you doing on a Thursday night? (Sorry, Woodland Park City Council, as you have lost a little of your former drama and will take a back seat again to the Broncos.) If that doesn’t fit your schedule, plenty of great NFL games are in store on Sunday.

If you are looking for a great local place to check out the action, don’t forget McGinty’s Wood Oven Pub in Divide, “The Center of the Known Universe,” the sponsor of this year’s Denver Broncos preview columns and NFL page.