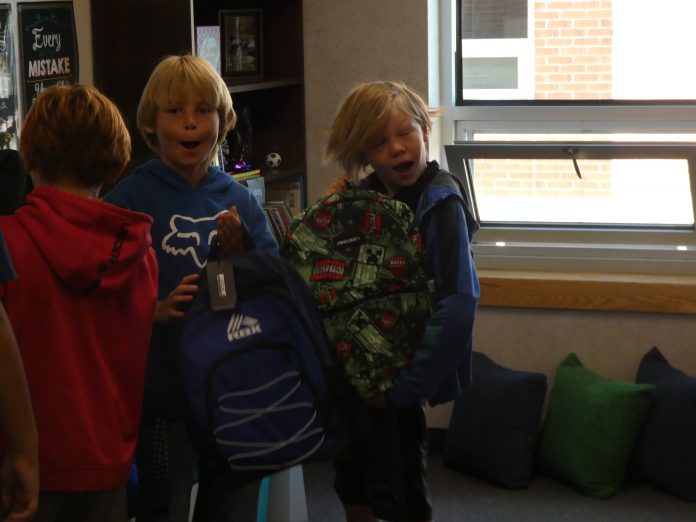 Fall Sports Kicks Off In RE-1 District, But Without Football

For most area families, the weeks before the beginning of the school year are extremely stressful.

Parents are tasked with such duties as getting their kids haircuts, buying clothes, and making sure their teens and youngsters are equipped with everything they need to start their classes.

With inflation striking like a brutal bullet, the price of many of these items has skyrocketed. Plus, some families in the RE-1 District are encountering tough times. 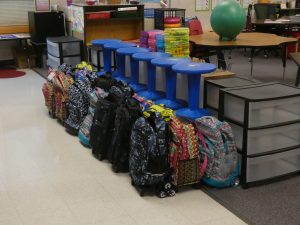 However, luckily for parents in the Cripple Creek-Victor RE-1 School District, the community pitched in to give parents some major help at the beginning of the ’22-’23 school year. Just before classes at the Cresson Elementary and Cripple Creek-Victor Junior and Senior High Schools started last week, it was announced that all students in the district would be getting free backpacks filled with all of the supplies needed for the upcoming school year.

According to the Student and Family Success Advocate for the Cripple Creek-Victor School District Jenn Sandborn, this year was the first year that donations were secured to purchase all student backpacks and supplies. In fact, she hopes to continue the tradition every year in the future.

“I started asking around for small donations to cover school supplies for certain students in need,” Sandborn said. “I’m also the homeless liaison so I was hoping to get their stuff covered so the parents didn’t have to worry about it and word of mouth just spread. Kiwanis, Community Cupboard, and the Aspen Mine Center were the first ones to donate and then the word spread to everybody else. And we are still getting donations and checks in from private parties.”

The backpacks included many supplies such as folders and water bottles. The list of people and organizations who donated include Kiwanis Pathways, Community Cupboard, the Aspen Mine Center, Faith Lutheran Church, Randy and Amanda Woost, St. Andrews Episcopal Church, American Legion Post 171, the Zoellner family, and the Mackin/McLeod family.

Maurice Woods and his Ace Hardware store also pitched in to give students something special to go inside their backpacks. Woods donated headphones to all of the students that attend the Cresson Elementary School. 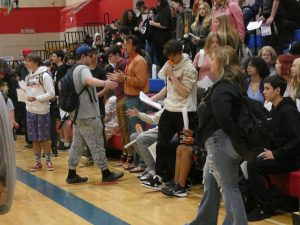 To start the school year, the junior and high school held a special breakfast for students and parents on the first day of school on August 14. After the breakfast, the students were invited into the auditorium for a small welcome assembly.

After the principal discussed bookkeeping items and welcomed the kids back from summer break they were then released to their classes. Before the students left the gym, those who had not yet received a free backpack got to choose from several designs they had available. 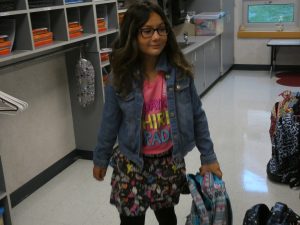 During the first day of school for the elementary school children, the day started with class introductions so the students had some time to meet their new teachers. After the introductions, the teachers then let the students go up one by one to pick out their favorite design of backpack.

As another added perk, parents of the Cripple Creek-Victor School District will not have to worry about coughing up funds for student meals. According to Sandborn, since the district’s schools are considered “Title 1” schools by the state, all students will receive free breakfast and lunch during the school year

And in other school opening news, Annie Durham, CTE coordinator for the Cripple Cree/ Victor School District, addressed the city council last week and informed local leaders and members of the public that ground-breaking has occurred on a new trade facility. This is part of an ambitious program to  help students who want to explore more specific trades, such as culinary arts and the tourism/hospitality field, agriculture and mechanics, other than a traditional college education.

A formal dedication will occur once the facility is completed. “They are excited to be back,” said Durham, in describing the reopening of classes early last week.

Out of all the good news happening in Cripple Creek with the upcoming school year, some bad news was also announced regarding the district’s pigskin struggles. According to RE-1  Athletic Director Rick Bowman, the school will not be having a football team this year.

Bowman said that the school tried to start up a team this year, but there was little interest in students joining the sport. After a couple of injuries before the season started, the decision was made to cancel football for the next two years due to a two-year opt-in or opt-out policy.

However, Bowman was still excited to announce that the school’s cheerleading team, volleyball, and cross country squads all started last week. The school plans on offering every other sport they usually offer for the ’22-’23 school year with the exception of football.

Bowman also said that the school along with cross country and track and field coach Amanda Wood were still working on raising funds to build a new track at the high school. However, Bowman said that the fundraising road could be a long one due to the fact that $800,000 to $1 million is needed to install the new track.