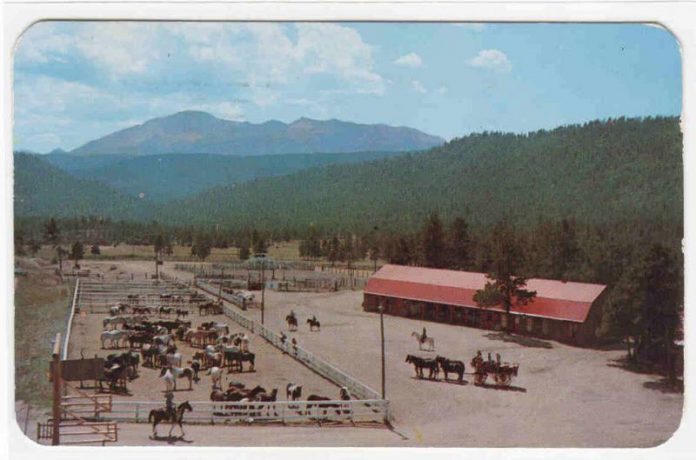 Back in the 1800s many people came to Teller County for a variety of reasons. And similar to today and the post-tourism era,  vacationing remained high on the list.

Some of the first major structures built in the Woodland Park area were hotels to cater to those who wanted to travel to the area and experience the mountain scenery.

According to the Ute Pass Historical Society’s book, “Discovering Ute Pass Volume II: Tales of Upper Ute Pass,” dude ranches focused less on raising livestock like normal ranches did, but instead they concentrated on giving tourists an exciting vacation in the “Wild West.” This meant that these guest ranches would provide visitors an experience that included horseback rides, good home-cooked food, campfires, and other activities such as golf, swimming, or tennis.

At one point, Teller County was known as a hotspot for dude ranches, but many of them have come and gone through the years. Even though there still are ranches in the area like the M Lazy C Ranch and the Triple B Ranch, which operate as guest ranches similar to the ones of the region’s past.

The following is a list of a few of the most famous dude ranches that came into the Ute Pass region, starting with the Skelton Ranch in 1905 all the way to the Triple B Ranch which is still in operation today.

When Judge William Skelton and his wife Lizzie first purchased the 400-acre ranch around three miles west of Woodland Park near what is now the Tranquil Acres subdivision, they turned it into a resort hub that quickly became well-known. The ranch’s facilities that could accommodate 250 people at $15 per week included 30 guest cabins, a 10-room house, a log dining house, a large three level barn, a 104-foot long chicken house, and an assembly hall with a large stone chimney.

The ranch operated until 1916 when the Skelton’s sold the ranch to a shoe company executive from St. Louis who wanted to convert the property into a stock ranch. However, the resort buildings were torn down in 1940 and the property became part of the Pike National Forest in 1960.

In 1934, Henry and Lulu Brockhurst turned the ranch Henry inherited from his grandmother in Green Mountain Falls into a dude ranch. In its heyday, the ranch offered good food and trail rides to the mountains around it.

In the 1950s, Brockhurst moved a livery that was located in downtown Green Mountain Falls to the ranch and he turned it into Henry’s Red Barn. The barn became a famous spot for the soldiers stationed at Fort Carson to come drink beer and dance.

The Paradise Ranch in Woodland Park officially opened in 1937, and then when Frank Snell purchased it in the 1940s it quickly became one of the most popular dude ranches in the United States. The ranch had more than 300 head of horses and it could accommodate 200 guests.

The ranch offered horses for all of their guests and they held special events like stagecoach races and a rodeo every Sunday on the ranch’s own rodeo grounds. In 1952, the ranch suffered from a fire that destroyed the main lodge building. But then less than a year later, Snell rebuilt the lodge and it became bigger and better than before.

Snell eventually sold the ranch in 1970 and all of the out buildings were sold off in 1978. The lodge operated as a motel and restaurant for a few years until the building was destroyed in 2017 after sitting empty for several years.

Alverta and Bud Burns first purchased the land that is now the Triple B Ranch in 1945 to use it as a working ranch or farm. But, after several efforts to grow food or raise animals like rabbits failed, the couple opened the facility up as a dude ranch in 1949.

The ranch offered many activities for their guests including trail rides around the property. Since Alverta Burns had experience as a nurse she quickly became known as the town’s emergency doctor. As the stories go, it was common for Burns to clear the dinner table while feeding her guests to tend to someone with injuries.

To honor the ranches of the region’s past, the Ute Pass Historical Society has been working on a documentary film to educate people about the local ranches. The video should be completed this fall.