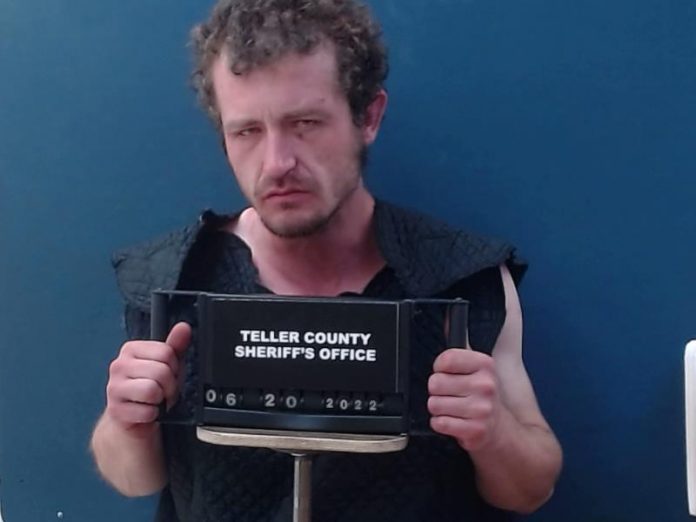 In the early hours of Monday June 20, 2022, the Park County Sheriff’s Lake George substation was burglarized and a marked Park County Sheriff vehicle was stolen. At 0327 am, the suspect in the stolen patrol vehicle went to a call that had been broadcast over the police radio system in Teller County. Teller County Deputies arrived on the scene at 0337 am and observed the Park County Patrol vehicle coming down the driveway towards them. The deputies ordered the vehicle to stop but the vehicle sped off at a high rate of speed. Teller County Deputies advised all local law enforcement agencies to be on the lookout for the stolen vehicle.

At about 0525 am the vehicle was spotted on Highway 24 Westbound in Divide and a pursuit ensued involving both Teller and Park County Deputies. During the pursuit the suspect vehicle reached speeds over 110 mph and committed numerous traffic violations. The stolen patrol vehicle crashed on Matakat Road around Mile Marker 4 and the suspect fled on foot into the woods. Teller and Park County Deputies were able to locate the suspect who was armed with a knife and was non-compliant. During the confrontation a Taser was deployed and at least one shot was fired by a law enforcement officer. No deputies were injured.

The suspect was taken into custody and transported to an area hospital due to self-inflicted knife wounds. The suspect has been identified as Jeremiah James Taylor, DOB: 09/1/1988. He is currently charged with:

Anyone with additional information regarding this investigation is encouraged to contact the Park County Sheriff at 719-836-4121 Option 5 or the Teller County Sheriff’s Office Investigations Division at 719-687-9657.