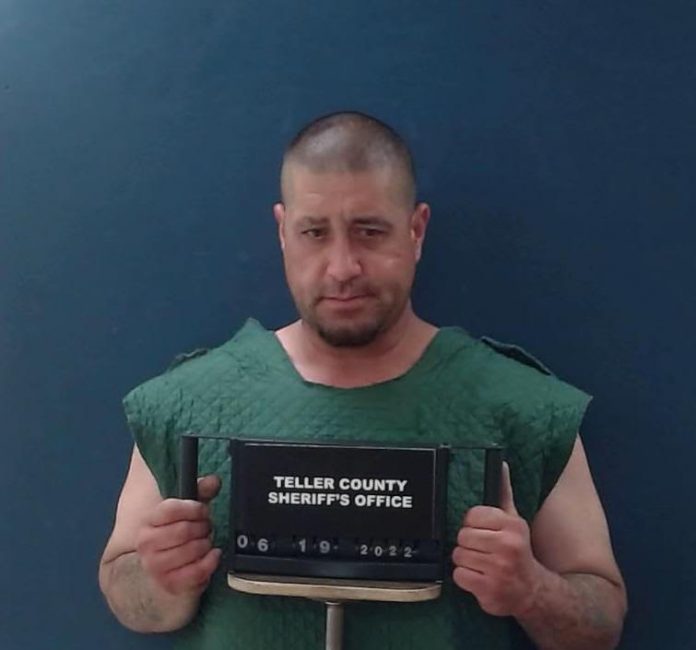 At approximately 6:38 PM of June 18th , officers responded to a call of a suspicious
vehicle with shots fired in the area of Hwy 24 at the eastern city limits near Crystola.
The reporting parties indicated a male subject driving a silver or gray truck fired shots
from a handgun at unoccupied vehicles stored at the Bad Rock Auto (2701 Mountain
Glen Ct.) and then fled from the scene. When officers arrived, they discovered evidence
at the scene consistent with the reported facts and began to look for the suspect vehicle
with the assistance of our law enforcement partners from TCSO and CSP. At approximately 7:30 PM, officers located a vehicle fitting the description provided abandoned at the house located at 1200 Kings Crown Rd.
During the initial contact and information gathering, it was discovered the homeowners
were not in town and the suspect was believed to be barricaded in the garage. After
several hours, and with the assistance of Teller County SWAT, the suspect was found
to be hiding in a car parked in the garage of the home. He was secured and transported
to the jail pending multiple felony charges. At the preparation of this bulletin, there is
little else known about motive, intent, or facts leading up to this incident. There is no
known tie to the owners of the home. There will be no further updates or available
information released tonight. As more information is gained, we will disseminate it
accordingly.