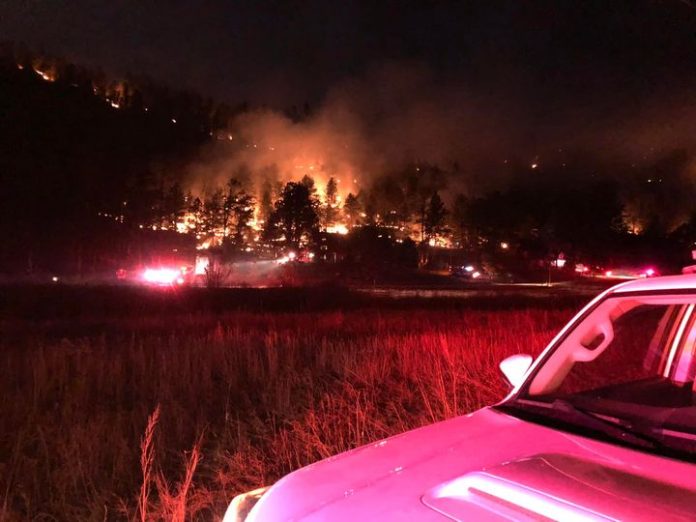 The battle against the High Park fire in Teller County, a blaze that scorched over 1,500 acres, is officially over, with local officials, elected leaders and emergency responders now waving a huge victory flag

It may not rank with the Union Army’s victory in the battle of Gettysburg during the Civil war, but in the eyes of some officials, it came pretty close.

The fire that forced the evacuation of hundreds of residents and threatened a spree of subdivisions and approached Cripple Creek, was reported as completely 100 percent contained by the middle of last week. Plus, the blaze, which kept the area on the edge for several weeks, was doused without the loss of  a single structure was lost, or a resulting injury or death.

However, the post-disaster victory flag comes with a stern warning:  This won’t be the last wildfire fight of the season, with predictions of a sizzling red flag, danger-ridden summer and fall. “That was our fifth fire, and is not our last one,” said Teller County Commission Chairman Dan Williams, when addressing the public and media during last week’s regular meeting in Cripple Creek regarding the High Park blaze.

At last week’s county commissioners meeting, comparisons were drawn with intensive war battles. “It was like combat, except there were no bullets,” said Chairman Williams, a military veteran who served in Iraq and Afghanistan. Williams described the battle against the High Park blaze as the most “intensive event” since his days of active military duty.

“It looked like Cripple Creek was on fire. It was horrific. Our goal was to save structures,” said Williams.

And the fact that a huge team of local, state and federal teams achieved this goal, despite constant days of red flag warnings, was described as nothing short of a miracle. “This was a Yeomen’s effort,” said Commissioner Bob Campbell.

He thanked  many residents, community leaders and nonprofits for their work, along with their state and federal partners.

The commissioners noted that the initial stand taken by local firefighters, especially the team led by former Four Mile Fire Protection District Chief Jay Teague (who is now the county’s director of emergency management), made the difference.

When the federal team got involved, much of the heavy work had already occurred, noted Commission Vice-chairman Erik Stone. Then, Mother Nature finally came to the rescue with a huge unprecedented spring snow storm.

The commissioners spent nearly 30 minutes praising the cooperative efforts  of local residents, firefighters and a spree of state and federal agencies at last week’s session.

Support from an Unlikely Ally

And surprisingly, their favorable comments extended to Democratic Governor Jared Polis, a leader whom they rarely agree with on policy issues.  Williams stated that the cooperation Teller received from the governor’s office was  outstanding, and he even cited near-midnight hour calls from the state head executive himself, who asked the commission chairman directly, “Dan (Williams) what do you need?”

According to Williams, Polis helped free up financial resources the county needed to really battle the blaze.

The fact that the county made an earlier emergency declaration, and a new state system for evaluating disasters, helped the county and won’t penalize the government financially.

Otherwise, Teller could have been staring at a possible $4.5 million fiscal strike. “It will be pretty minimal,” said Campbell, in describing their budget impacts.

In past years, the potential costs played a big role, and sometimes forced counties to pick winners and losers in combating a natural disaster, such as having to choose what area got top priority in being saved.

“That wasn’t the case this time,” related Campbell

The fire actually started shortly after the board declared a Stage 2 ban during its May 12 meeting. This is one of the more intensive fire restrictive measures, falling just short of a complete shutdown of recreation areas.

Williams stated that they were thrilled by the intensive air power used to battle the fire. But until they received complete fiscal assurances from the state, they often started calculating the potential costs, which would hover in the millions.  Teller may have to pay for the first day of firefighting, but after that they are off the hook, according to previous television media reports.

On a personal level, the commissioners said they tried to help with the emotional plight of residents evacuated. “It is anxiety-ridden,” admitted Stone, who stated this first experience in/Teller County occurred during the Hayman fire.

He admitted that the experience of evacuation from your home, and not knowing if you will ever see that structure again, is quite scary.

The commissioners said they tried to attend as many town hall meetings as possible to comfort impacted residents, and conceded they had to prepare for the prospects of telling folks their homes were destroyed. “We felt it was important to be there,” said Williams.

Williams stated too that this fire taught them some key lesson involving the number of elderly individuals who reside in Teller, often using oxygen machines, and who aren’t keen on social media or Facebook. As a result, he cited emergency communications as one area they want to work on in dealing with future disasters. They believe the selection of Teague as their emergency management chief will be a big asset.