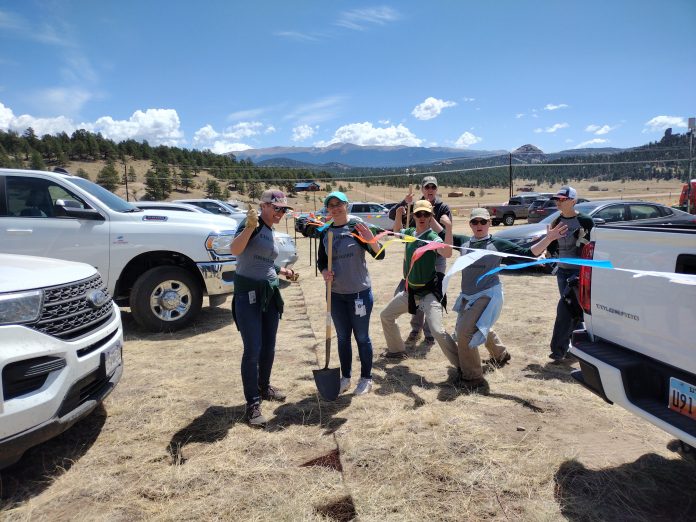 Snow Blast Cheered On by Local Residents and Firefighters

Mother Nature finally offered some needed relief in efforts to squash the most significant wildfire in Teller County for the 2022 season, courtesy of a bizarre late-May snow blast, with accumulations topping the 25-inch mark in parts of Teller.

The timing of the storm couldn’t have occurred at a better time and may have resulted in a few celebratory snow dances.

In the beginning of the week, the High Park Fire, five miles west of Cripple Creek, continued to burn and containment was low.

However, by Friday, fire crews were able to reach 89 percent containment before weather forecasts showed snow in the area over last weekend. Then, a huge snow storm doused the region with temperatures plunging by more than 40 degrees. Thursday was a rough day, as firefighters once again contended against huge winds and near-record high temperatures.

The trend, though, improved throughout the week both on a safety and financial level for the county.

In fact, all of the people evacuated from their homes for nearly a week were allowed back in last Wednesday. By Saturday, the federal incident command crew in charge of the fire pulled out and moved on to other fires in the state.

By last Friday, it was reported by officials that the majority of the burn area was contained before the area was supposed to get three to six inches of snow. The officials did say though, that there was one section of the fire near Booger Red Hill that had not been contained.

On Wednesday, Teller County Commission Chairman Dan Williams sent out a letter to the public announcing that all evacuation and pre-evacuation orders had been lifted. In the letter, Williams said that the plane crews fighting the fire were released to aid in the efforts of fighting the wildfire near Pagosa Springs.

Williams thanked all of the various agencies that aided in the firefighting efforts and expressed how proud he was with what the county and supporting crews were able to accomplish. He also stated that the county is ready should a similar event occur in the future.

“We will be sitting down with the state over the next few days to reconcile all costs and Teller County will be in good financial shape and prepared for any future fire,” Williams said. “I just completed a call with Governor Polis. I expressed the county’s gratitude for the swift and overwhelming support we received from the state and federal agencies in helping us stop this fire at just under 1600 acres in six days. The high number and type of aircraft and ground hotshot teams along with our firefighters and those of neighboring counties and agencies made the difference between losing control of this fire and stopping it here in Teller County.”

Local School District Steps Up to Aid in Firefighting Efforts

As the fire continued to burn after four days, the incident command team that took over control shortly after the blaze started, told county officials that they were in dire need for help. The county reached out to the community to figure out a way to give the firefighting crews assistance.

Then on Tuesday, the superintendent of the Woodland Park RE-2 School District, Dr. Mathew Neal, announced that he would be sending some district staff to help out at the incident command center. The initial plan was to close one of the three elementary schools on Tuesday, Wednesday, and Thursday and to shut down the high school and middle school on Friday.

While the schools were closed, all of the staff members had the option to go out and help the firefighting efforts at the incident command center south of Florissant. Several teachers ended up helping the firefighters distribute supplies and set up the site’s infrastructure, including putting up several tents.

“A crisis rarely arises at a convenient time; however, I am incredibly grateful for a staff eager to respond and lend a helping hand to our responders,” Dr. Neal said. “WPSD staff are incredibly dedicated to this community in every way, particularly when stepping up to a challenge. We are a team and absolutely dedicated to our families and students of our schools both in and out of the school environment.”

According to officials on the scene, the district staff members provided necessary help for the crews. The school staff completed many of the needed chores at the fire’s command center so that the firefighters could stay out on the scene of the blaze.

In fact, officials said that after the school staff came to help last Tuesday, the crews were able to double the containment reached on the blaze in a 48-hour period. Many of the federal officials said that they would not have been able to make that kind of progress without the assistance of school district staff.

After the school staff provided assistance for two days, they were relieved of their duties. Therefore, only Gateway and Columbine Elementary schools ended up closing. Gateway closed Tuesday and Columbine closed on Monday and several of the schools’ staff members went out to help with the High Park fire containment efforts.