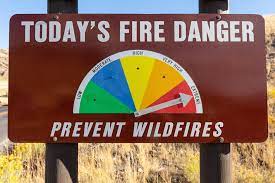 Even with a slight reprieve locally due to a recent snow storm, the entire state of Colorado has experienced super dangerous fire conditions.

This has conjured up bad memories as Teller County is located inside a hot red danger zone for wildfires and has experienced its share of difficult disastrous blazes in recent years. But at the same time, this scare is fueling the need for strong fire mitigation efforts.

The lack of precipitation,  coupled with the abnormally high speed winds,  have become the two main culprits of the early season wildfires.

Many residents who remember the tragic Hayman and Waldo Canyon fire events in the past have put forth efforts to increase community preparedness. This Saturday (May 7), the Northeast Teller County Fire Department (NETCO) will be hosting a Wildfire Community Preparedness Day to help residents get prepared for the possibly intense fire danger season coming up in the next few months.

Usually, the fire season for Southern Colorado does not start until late May and early June. However, in the month of April this year, the state has already seen several blazes ignite, including half a dozen in Teller County and nearby areas.

The bad news is many local experts do not see a light at the end of the tunnel when it comes to fire dangers this year. The weather forecasts do not show any major precipitation coming to the Ute Pass region in the next coming weeks.

According to Four Mile Fire Chief Jay Teague, it has been unusual that fires have already been starting in the area. “It’s not looking too good because we usually don’t enter a very high fire danger risk until June or July,” the fire chief said. “Usually, we are getting some late snows through the month of May. But due to the lack of precipitation, our moisture levels are already border lining the ‘very high’ to ‘extreme’ range, according to the U.S. Forest Service matrix.”

He also said the abnormally high winds have been a major factor contributing to high fire dangers. “The real problem has been the continual high winds,” Teague said. “We have had a record number of days with wind (speeds) above 20 to 30 miles per hour and that’s what is drying everything out.”

And unfortunately, the fire chief does not see the fire danger situation improving any time soon. “The forecasted weather model is not showing any kind of significant precipitation, so it might get worse,” Teague explained.

Teague also said that the southwestern part of Teller County has worse fire dangers than other parts of the county. Sections of the county that the Four Mile Fire Department services sees significantly less precipitation amounts than areas near the Rampart range, such as Woodland Park and Divide.

The fire chief also stressed the importance of being careful about the potential of starting a wildfire.

“Even if we are in a stage one burn restriction, you are still legally allowed to have a campfire in a permanent fire ring,” Teague said. “Some people think they can still do that just because it’s legal to do it, but when we have these 30 to 40 miles per hour gusts, it’s really easy for those embers to be blown out of that fire ring and then start a fire. That would be one pointer is to just not burn period.”

Teague also said that people who burn a wood stove or fireplace in their house should properly dispose of their hot coals. Smoking outside can also become very dangerous when the fire dangers are high.

This Saturday from 9 a.m. to noon NETCO will be hosting a wildfire preparedness event at their fire station in Woodland Park. The event is not new to town this year, as several groups have held similar community information events in the past.

However due to the pandemic, there has not been a similar wildfire information event for the last two years and the one they had planned in 2019 got snowed out. This year, members for the fire department and other community organizations, will participate in the event.

According to one of the event’s organizers, Mike Nakai, the main focus for the wildfire preparedness day will be getting people signed up for the emergency alert systems in place in the county. “The message we are trying to get out is that it is the responsibility of each individual person,” Nakai said. “They need to take the responsibility to get on the sign up lists for notifications. The law enforcement agencies will try to go to the homes that area affected and knock on the doors and make sure they are evacuated. But depending the size of the fire and where it is located they might not be able to do that.”

He said that there will be stations set up that explain proper evacuation procedures as well. There will also be people there focused on mitigation explaining landscapes and different types of vegetation that can make houses more fire resistant.

There will be an area set up for kids so that they will not be present when sensitive subjects regarding fires get discussed. Smoky the Bear is also scheduled to make an appearance.

Green Box Snags $25,000 Grant From National Endowment for the Arts